After making their way through high school (twice), big changes are in store for officers Schmidt (Jonah Hill) and Jenko (Channing Tatum) when they go deep undercover at a local college. But when Jenko meets a kindred spirit on the football team, and Schmidt infiltrates the bohemian art major scene, they begin to question their partnership. 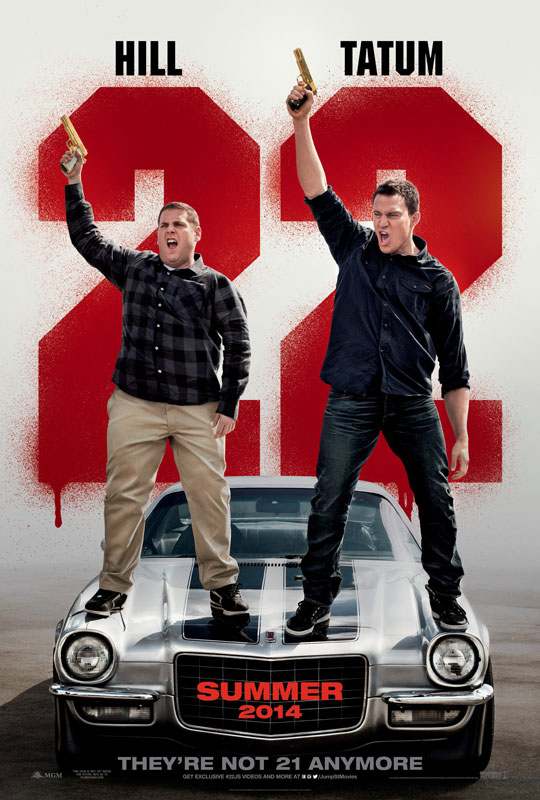 Though the characters are inventions, the heart of the relationship between Schmidt and Jenko is modeled after the two real-life relationships behind the cameras: the one between Lord and Miller, and the other between Hill and Tatum.

In 2012, audiences around the world sparked to one of the year’s funniest comedies with the hit film 21 Jump Street. Now, in 22 Jump Street, starring Jonah Hill, Channing Tatum, Peter Stormare, and Ice Cube. Directed by Phil Lord & Christopher Miller, the filmmakers take the relationship to the next level.

If the first film was about forming a relationship, the new film is about what it takes to make a relationship last. That idea dovetails nicely with the fact that the film is a sequel. Rather than approach 22 Jump Street by trying to re-create the magic – a re-tread of what came before – the filmmakers sought ways to keep it fresh… “The thing that struck us about movie sequels is that, in a way, they’re like the second part of a relationship,” says Lord.

Returning to the role of Captain Dickson is Ice Cube. “He was my childhood hero,” says Hill. “When we worked on the first one, the first thing we wrote down was that Ice Cube – the guy who wrote ‘F— Tha Police’ – should play the police captain. It’s a true childhood dream to be able to hang out with him.” Cube relishes the role. “I’m the meanest, nastiest captain of them all,” says Ice Cube.

In the role of Maya, who has a fling with Schmidt after the two connect at a poetry slam event at a campus coffeehouse, the filmmakers cast Amber Stevens. “She’s attracted to Schmidt – she’s intrigued by his chutzpah,” says Stevens.

Production designer Steve Saklad says that Lord and Miller were clear in their direction: they wanted a realistic design into which they could drop the madness of Schmidt and Jenko.  As a result, in creating the college environments, Saklad used sepia-toned images to create a history to the institution – and piled on the gags from there. In naming the on campus buildings, Saklad used names of fonts to create the fictitious Helvetica computer center, Bookman Memorial Library, Garamond Quad, and Clarendon Hall, all based on font names.

For the Jump Street unit headquarters, Saklad and his art department team located a neoclassical church in New Orleans that had been abandoned since Hurricane Katrina. After reinforcing and cleaning the building, they transformed it into the Vietnamese church.

The film’s biggest set piece is the climax, which takes place in the fictional town of Puerto, Mexico.  The sequence was filmed in Puerto Rico, with the beach party filmed on the sand as hundreds of extras danced to the beats of the world-renowned DJ Diplo.