Pastor Don Piper died January 18, 1989 when a semitractor truck crushed his car. Declared dead by the first rescue workers to arrive on the scene, Don’s body lay under a tarp for the next 90 minutes. Don’s soul, meanwhile, was experiencing love, joy, and life like he’d never known before. Don was in Heaven. 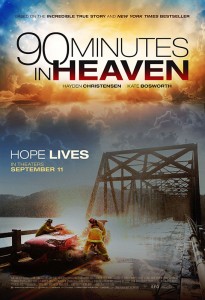 In 2014 Jackson formed Giving Films to further raise standards on Christian filmmaking and, with film profits, to continue to support charities/ministries helping women and orphans.

At daybreak on February 2, 2015, inside a chilly research hospital built in the 1970s on the edge of Atlanta, the 90 Minutes in Heaven cast and crew, led by producer and Georgia native Rick Jackson and Director Michael Polish, rolled cameras for the first time. Their aim? To recreate the New York Times bestselling book, 90 Minutes in Heaven: A True Story of Death and Life , written by Don Piper and Cecil Murphey, originally published in 2004 by Baker Publishing more 7 million copies sold in 46 languages. Their second objective was, as Rick Jackson put it, to tell the rest of story.

That day in February, for 12 hours cast and crew hustled about the hospital’s closed off wing working through scenes. As his wife smiled and politely stayed out of the way, a gray bearded man in his 60s, with a slight limp, moved through the set interacting with nearly every cast and cr ew member, offering directions, telling jokes, praying for people and standing still when cameras rolled. Here were the real Don and Eva Piper. Don remained a constant presence on set and, whenever possible, Eva and their children joined him.

After seven long years of declining offers from major production companies and movie studios, Don and Eva found a production partner to entrust with their family’s story. “For seven years I’d prayed, ‘God, we’ve got to get this movie made. Please, let’s move it forward.’ Then one night I thought, ‘This is not the right prayer,’” Eva recalls. “I changed it to, ‘God, put this movie in the hands of the people you want to make it to glorify you.’”

Two weeks later, in the fall of 2014 and on his way to an LSU football game with his son, Don’s phone rang, showing an unfamiliar number. It was Rick Jackson, chair and CEO of a newly formed film company called Giving Films. Don recalls his surprise. “Not only did Rick want to fund and produce an accurate and hopeful movie, he wanted to give all his proceeds away,” he said.

Jackson collaborated with EFO Films, which controlled the movie rights to Don’s book, and signed Michael Polish to adapt the screenplay and direct. Over the next several months Jackson, Polish and Bosworth spent hours talking directly with Don and Eva until all parties believed the screenplay captured the entire family’s journey.

On the screenplay, Polish worked closely with his wife, Kate Bosworth, who stars in the film as Eva Piper, alongside Hayden Christensen as Don.  “Working with Kate I liked so much I married her. It’s not work; it’s a collaboration that you feel when you’re a director and you want that with an actor. And it’s as great a marriage on the set as off. Her collaboration was to embody Eva but also to understand what it’s like to be a mother. She was able to learn Eva and the ways she mothered her kids, to get the insight no book can give, to find the tissue between every moment.” says Director Michael Polish.