A Tale of Love and Darkness is based on the memories of Amos Oz, growing up in Jerusalem in the years before Israeli statehood with Arieh, his academic father and Fania, his dreamy, imaginative mother. They were one of many Jewish families who moved to Palestine from Europe during the 1930s and 40s to escape persecution. Arieh was cautiously hopeful for the future but Fania wanted much more. The terror of the war and running from home had been followed by the tedium of everyday life, which weighed heavily on Fania’s spirit. Unhappy in her marriage and intellectually stifled, she would make up stories of adventures (like treks across the desert) to cheer herself up and entertain her 10-year-old son Amos. 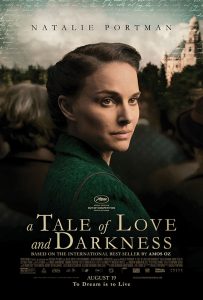 Natalie Portman was born in Israel and lived there until she was three with her Israeli father and American mother.

Writer/director Natalie Portman read A Tale of Love and Darkness about seven years ago. “I wanted to direct it the first time I read it,” she said. Natalie Portman knew she wanted to make a movie based on the book, “but the part I didn’t know was that I was going to write it. I went around to a lot of writers to ask them to do it, and at the end some writer friends of mine said, ‘You should do it. Just do it. You have such specific ideas.’”

“I am a huge fan of Amos Oz,” said producer Ram Bergman, “and I love the book. When I met Natalie she had been wanting to make the movie for a number of years, and it wasn’t coming together. I wanted to get involved.”

Mr. Bergman described the launch of the project. “It was two years ago in Paris,” he said, “when Natalie told me she was ready to make this movie. I said, are you ready to put your life on the side and put other commitments aside? And she said yes. So I made some calls, I sent the script to David Mandil, who is one of the best producers in the world and the premiere Israeli producer, and he said he wanted to do it. Then I called Nicholas Chartier and asked him if he wanted to finance it, and he said yes before he even read the script. That is how he does things, which is why I love him. So very quickly we had a movie. Natalie moved to Israel to be there for a while perfecting the language.”

“I was aware of the book when it was first published,” said producer David Mandil, “and two years ago when I got the script, I met with Ram Bergman and Natalie.”

Portman always intended to make the film in Hebrew with sub-titles. “My initial attraction to the project was because of the language and it seemed like a big mistake – a bad mistake – not to make it in Hebrew,”  Portman said, who speaks fluent Hebrew. “It’s tricky because Americans tend to make movies about other places in English and give people a British accent and say that it’s Germany,” she laughed.

Casting was one of Ms. Portman’s favorite parts of the filmmaking process. She describes finding the actors. “It’s really fun for me to see these characters come to life after living with them for so long,” she said.

“I wasn’t sure what I wanted to do with Amos,” Ms. Portman continued. “Originally I thought to have him be quite young in the beginning, like a six-year-old, then 12 and a third one at 16. So we started auditioning every Ashkenazi boy we could find. I saw hundreds and hundreds and hundreds of auditions.”

The primary characters are 10-year old Amos, his father Arieh and his mother Fania. “Amos is a child, but a very perceptive and observant young man,”says the director. Because the film takes place over a period of time, several different actors were used to show Amos at different stages of growing up. “There are three Amos’ in the movie,” said Ms. Portman. “We have the Amos we see in most of the movie, which is played by Amir Tessler, and he is nine. Then we see Amos later when he moves to the kibbutz, which is played by Yonatan Shiray when he is 16, and we have Amos today, in his 70s, who is played by Alex Peleg. The voice of Old Amos was narrated by Moni Moshonov, who is a well-known Israeli actor.”

Ms. Portman plays Fania, Amos’ emotionally fragile mother. “Fania is a woman who was brought up with a romantic idealization of Israel,” ads Natalie. In the movie, a recurring figure called The Pioneer appears in Fania’s fantasies. “The Pioneer is the idealization of Israel,” said Ms. Portman. “He is the mythological Israel – the story of pioneers draining swamps and turning them into orchards. He is the mythology we’re raised on.”

The film was shot entirely in Jerusalem and principal photography lasted six months. Post-production work was done outside Paris and in Los Angeles, and the sound was done in London.