Based on Lawrence Block’s best-selling series of mystery novels, A Walk Among the Tombstones stars Liam Neeson as Matt Scudder, an ex-NYPD cop who now works as an unlicensed private investigator operating just outside the law. 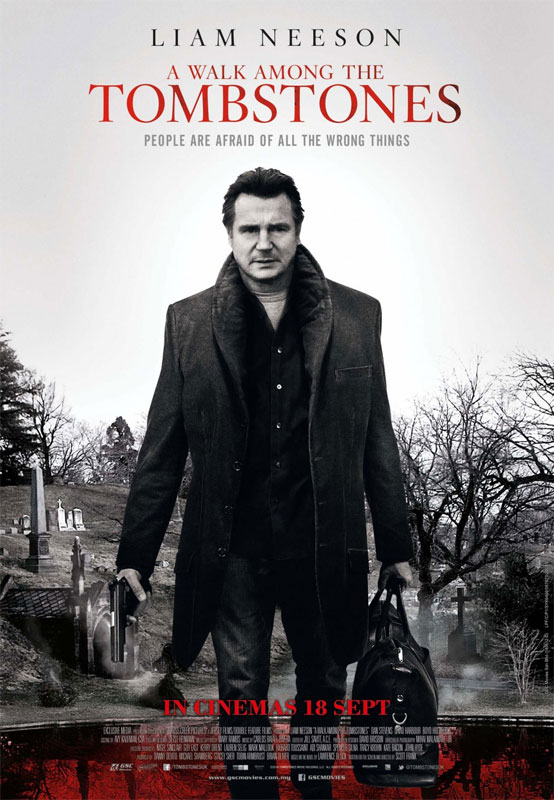 When it came to the role of ex-NYPD officer Matt Scudder, the filmmakers knew that there was only one man for the job: Liam Neeson. In turn, Neeson was drawn to exploring the loneliness of Scudder’s character, as he found the screenplay reflected the bleakness of Scandinavian crime writers whose work he was reading at the time he was approached.

In the early ’90s, novelist Lawrence Block wrote “A Walk Among the Tombstones,” the 10th book in his best-selling series that follows the cases of troubled private detective Matthew Scudder in his quest for redemption. The four-time Edgar Awardwinning writer readily admits that the ex-cop remains a character who simply will not leave his mind: “I started writing about Matthew Scudder in the mid-’70s. There have been moments over the years where it’s seemed as though the series was done, but there always seemed to be more I had to say about him.”

More than a decade ago, the novel was brought to the attention of Jersey Films by Scott Frank, an accomplished screenwriter with whom the production company had frequently collaborated. Frank was certain that Block’s signature book would translate into a harrowing suspense thriller, and knew that the filmmakers would be intrigued by its premise. Indeed, they were moved by the story’s tortured soul who sought redemption for past transgressions, as well as the page-turning nature of the intimately documented crimes. Producer Stacey Sher reflects: “There are two things always going on in Lawrence’s novels: Scudder’s internal struggle and whatever mystery or intense situation that he is going through in each book. The character’s under extreme pressure, and the situations are extremely tense.”

Sher’s faith in the development process was buoyed by her trust that “there is no expiration date on a good story.” She explains this dogmatic belief: “The universe protected the movie for 12 years and everything finally fell into place, which allowed Scott to write and direct it and Liam to star in it.”

Another performer who was keen to explore darkness in his character was Dan Stevens, who plays Tombstones’ Kenny Kristo, a man who loses everything when he finds his beloved wife brutally
murdered.

Playing the role of the aspiring junior detective is rapper Brian “Astro” Bradley, who first skyrocketed to audiences’ attention as one of the finalists on the inaugural season of The X Factor. Since that time, he has ventured into the world of film. Astro shares a bit about his character: “Matt Scudder comes into the library and TJ’s sitting there; he sleeps in the library because he’s homeless. TJ and Matt get into a conversation and he finds out that Matt is a private eye, and TJ wants to be just like him. So he follows Matt around the whole movie, and eventually helps him solve a case.”

For Lawrence Block, New York City serves as a distinctive presence within his novels, and so the decision to shoot the film primarily in Brooklyn seemed obvious. Other key New York City and outer borough locations for A Walk Among the Tombstones included Hell’s Kitchen, Red Hook, Bushwick and the Lower East Side.