About Time is a comedy about love and time travel, which discovers that, in the end, making the most of life may not need time travel at all. The film co-stars Tom Hollander as Harry, Tim’s tortured playwright landlord, and Margot Robbie as Charlotte, the previous love of Tim’s young life. Collaborating with writer/director/executive producer Richard Curtis are producers Tim Bevan and Eric Fellner. 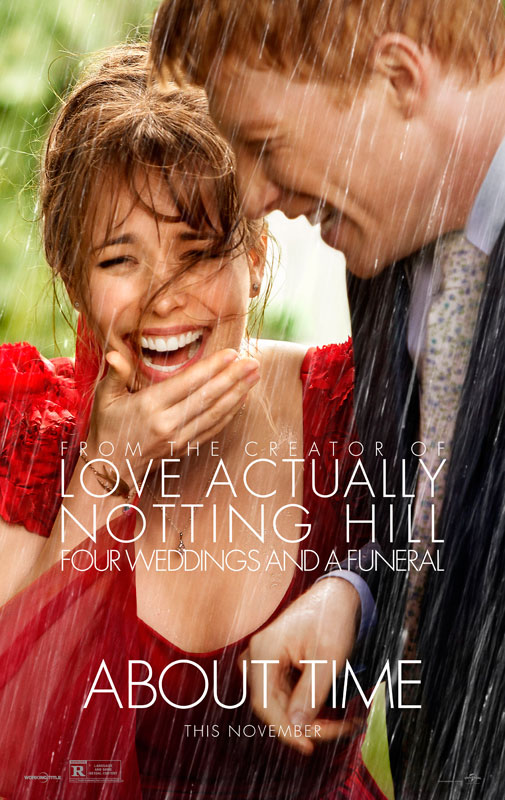 About Time reunites Richard Curtis with Working Title producers Tim Bevan and Eric Fellner, for the eleventh time in 25 years.

The genesis for About Time ignited from a conversation that Curtis had with a friend about what they would do if they were told that they had only 24 hours left to live. “We both decided that we’d want a very normal day at home with the family, doing the things you normally do,” recalls Curtis. “I thought it was an interesting observation, and the next step was how I would be able to incorporate this into a movie. It would have to be about someone who could manipulate their final day or manipulate their life in some way to enable them to come to that conclusion. That’s when I thought about time travel.”

From the start, the producers and casting director Fiona Weir knew performer Domhnall Gleeson would be ideal for the role of the time-traveling Tim Lake. However, he did quite shock them upon introduction. His rugged exterior aside, producers were keen on the Irish actor joining the production as their lead. Compliments Bevan: “Domhnall is a brilliant young actor and has the ability to be extremely dramatic and very funny, which is a very unusual combination.”

With Gleeson on board the production, filmmakers moved forward in casting the role of Mary, the young American woman with whom Tim falls in love, marries and starts a family. Because of Rachel McAdams’ busy schedule, the filmmakers weren’t certain she would be able to join the production. Little did they know, however, that she adored the script. Curtis was thrilled that an actress of McAdams’ caliber had signed onto the film.

In casting the role of Tim’s Dad, filmmakers turned to a veteran of Curtis’ films: much-feted performer Bill Nighy. About Time marks Nighy’s fourth project with Curtis. Opposite Nighy’s character, Lindsay Duncan took the role of Tim’s Mum, the matriarch of the family.

About Time began its nine-week shoot in June 2012, filming for three weeks in Cornwall, five weeks on location in London and a week at Ealing Studios. Originally, when Richard Curtis penned the script, he had Scotland in mind for the location of the Lake family home. However, filmmakers did not have luck securing a suitable house in that country, so they moved along to Cornwall.

The Lake home that the team discovered was a privately owned 1850s house in Porthpean, with a garden overlooking the sea and its own path down to the beach. Truly, it could not have been a more perfect location in which to incorporate Kelly and Curtis’ vision. The majority of the scenes including the family were filmed at this home.