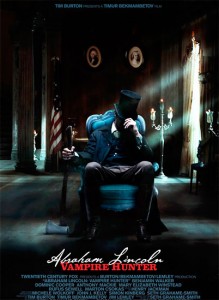 Abraham Lincoln: Vampire Hunter explores the secret life of our greatest president, and the untold story that shaped our nation. Visionary filmmakers Tim Burton and Timur Bekmambetov (director of “Wanted”) bring a fresh and visceral voice to the bloodthirsty lore of the vampire, imagining Lincoln as history’s greatest hunter of the undead.

Burton, Bekmambetov, and the cast and crew of ABRAHAM LINCOLN: VAMPIRE HUNTER welcome you to the secret, action-packed life of an American icon. A hero by day…and a superhero by night. Their film has the action, thrills, cutting-edge visual effects and 3D, and monstrous creatures of the undead, you’d expect from a title that includes the words “vampire hunter.” But through its portrait of a beloved historical figure, it is grounded in reality. This is the Lincoln you know – with one additional quality of which you were unaware. Until now.

The Abraham Lincoln Presidential Museum in Springfield, Illinois presents history in a way that’s seldom been done before. Ghosts, booming cannons and lurking villains combine with rigorous authenticity and priceless original artifacts. During pre-production of ABRAHAM LINCOLN: VAMPIRE HUNTER, the filmmakers were thrilled that the Museum opened its doors to them, offering the production invaluable information and support.

SETH GRAHAME-SMITH (Co-screenwriter) is the author of the best-selling book Abraham Lincoln: Vampire Hunter, upon which the film is based. He wrote the screenplay (based on characters created by Dan Curtis) for the upcoming film “Dark Shadows,” directed by Tim Burton, starring Johnny Depp. Grahame-Smith is well known as the author of the New York Times best-selling novels “Pride and Prejudice and Zombies” and “Abraham Lincoln: Vampire Hunter,” both of which are being adapted as feature films. “Pride and Prejudice and Zombies” was optioned by Lionsgate Entertainment, with Natalie Portman producing. Grahame-Smith and David Katzenberg formed a production company Katzsmith, which is currently developing a diverse and exciting slate of new projects for television and film.