Based on the best-selling novel by Zane, Addicted is a sexy and provocative thriller about desire and the dangers of indiscretion. Successful businesswoman Zoe Reynard (Sharon Leal) appears to have attained it all – the dream husband she loves (Boris Kodjoe), two wonderful children and a flourishing career. As perfect as everything appears from the outside, Zoe is still drawn to temptations she cannot escape or resist. 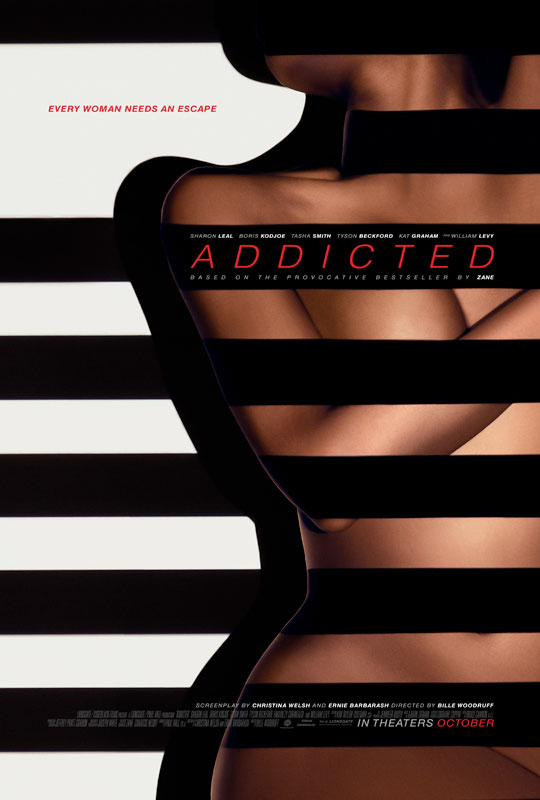 To assure the visuals were all in place before the human emotions came to life in the moment on set, director Bille Woodruff storyboarded the whole film.

For producer Paul Hall, Bille Woodruff was just the right director to balance the twists of the story with the spirit of Zane’s unabashed explorations into the full spectrum of feminine sexual experiences. The director brings together the volatile chemistry of Sharon Leal with Boris Kodjoe, William Levy and top male model Tyson Beckford in this story of desire inside and outside of marriage, and in and out of the usual bounds of restraint.

It was the way Zane mixed such palpably familiar characters into some of life’s most tempting, provocative and unsettling situations that drew director Bille Woodruff to commit to the taboo-busting project. He began by exploring the broad appeal of her books. “Zane’s books have spoken to a huge audience who want to be addressed,” the director observes.

The script by Christina Welsh and Ernie Barbarash focused in on Addicted’s alluring lead character, Zoe Reynard, whose picture-perfect world begins to unravel, strand by strand, when she is tempted to step out on a beautiful marriage she doesn’t want to lose. From the beginning, the filmmakers knew that the actress playing Zoe would need to be simultaneously brave and emotionally sophisticated to go all the places Zoe goes – from a tenderly loving wife to a dark seductress to a woman battling for control of her psyche. To embody all of this along with Zoe’s deep-seated strength, the filmmakers chose Sharon Leal. Woodruff appreciated Leal’s fearless approach to these physically and emotionally vulnerable moments.

Just as key as casting Zoe was finding an actor to play her husband, Jason, a man no one would ever foresee as a wronged husband. The choice was Boris Kodjoe, the German-born actor who has made People Magazine’s “50 Most Beautiful People In The World” list. Woodruff had also known Kodjoe since he first came to the U.S. on a sports scholarship. Taking the role of Corey is Tyson Beckford, who turned the fashion world upside down when he became the world’s first black male supermodel in the 1990s.

Filming of Addicted took place in Atlanta, where Bille Woodruff provided a set that was a private refuge for actors who were ready and willing to get highly intimate on screen. For Woodruff, getting the tone of Zane’s hugely popular novel just right was a constant motivation. “I felt it was important to bring a certain level of honesty and realism to this story because it’s about things that people really go through,” he says. “There is an element of fantasy and escapism but then there are other parts that are just very real and raw.”