African Cats (Also Known As: African Cats: Kingdom of Courage) is a nature film from Disneynature. Disneynature, the same studio that took you across the world with EARTH and under the surface with OCEANS. Bringing together top nature filmmakers, the stories of wildlife survival and struggles are beautifully told and narrated by Samuel L. Jackson. 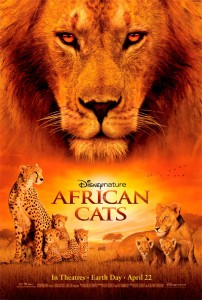 African Cats is a nature documentary centered on two cat families and how they teach their cubs the ways of the wild.

An epic true story set against the backdrop of one of the wildest places on Earth, AFRICAN CATS captures the real-life love, humor and determination of the majestic kings of the savanna.

The story features Mara, an endearing lion cub who strives to grow up with her mother’s strength, spirit and wisdom; Sita, a fearless cheetah and single mother of five mischievous newborns; and Fang, a proud leader of the pride who must defend his family from a once banished lion. Disneynature brings THE LION KING to life on the big screen in this True Life Adventure directed by Keith Scholey and Alastair Fothergill (EARTH).

The families of the animals in African Cats were filmed on the Maasai Mara National Reserve, a major game region in southwestern Kenya. The Maasai Mara is one of the few remaining places in Africa where lions, cheetahs and leopards live in large numbers and in close proximity. To help achieve scientific accuracy, the directors recruited Dr. Sarah Durant of the Zoological Society of London.

Durant worked in Tanzania for the last 19 years, studying cheetahs and working toward the conservation of all of Africa’s large carnivores.

Jordin Sparks recorded an original song as the movie’s theme song, called “The World I Knew”. The video premiered on Disney Channel on April 2, 2011 during The Suite Life Movie and played at the end credits of the film.