The dramatic approach of All Your Dead Ones (Todos Tus Muertos), the second Colombian director Carlos Moreno feature, is simple and with a minimalist proposal, a purpose that could be related to a theatrical play more than a film.

It is a tale with symbolic and metaphorical ingredient, with a few characters, one single space, open yet claustrophobic, and a major plot bordering on fable, dark comedy and absurd. 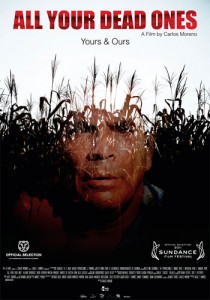 The cast is a fortunate combination of actors, who apart from being collaborators in previous projects, had also faced the task of creating and writing fiction for film, theater or literature.

The constant sweat and the sluggishness of  time are strengthened by a naturalist art proposal and a photography that stays away from the embellishment. In addition, elusive dialogues, free-style performances and a paused editing end up configuring this small universe which is nothing more than a satirical mirror of a society that as lost the ability of feeling pain and compassion for others.

All Your Dead Ones story’s about an ordinary farmer interrupted morning routine when he makes a grim discovery in the middle of his cornfield – a huge pile of dead bodies.

Aghast, he reports the mysterious massacre on what happens to be Election Day. When the small-town mayor and police lieutenant take notice, fearful of unleashing a public scandal, they stall and intimidate the farmer and his family.

Meanwhile, the sun beats down, and the eerie corpses remain, refusing to be ignored. (Synopsis courtesy of the Sundance Film Festival)