In Aloha, a celebrated military contractor (Bradley Cooper[1]) returns to the site of his greatest career triumphs – the US Space program in Honolulu, Hawaii – and reconnects with a long-ago love (Rachel McAdams) while unexpectedly falling for the hard-charging Air Force watchdog (Emma Stone[2]) assigned to him. 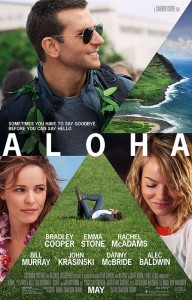 The traditional military family neighborhood where the Woodside family resides was filmed at Hickam Field’s historic Fort Kamehameha housing development. The neighborhood, featuring approximately two-dozen Craftsman-styled houses situated on two tree-lined streets adjacent to the water, was originally built as Navy housing in 1916, but was fully vacated by 2008.

From Academy Award®-winner Cameron Crowe, the writer-director  “Aloha is a movie about second chances at life,” . After creating a finely tuned signature style in such films as Jerry Maguire, Almost Famous, and Say Anything…, Crowe turns his eye to Hawaii, bringing his unique talent for creating unforgettable characters and his extraordinary ear for dialogue to the story of Brian Gilcrest (Bradley Cooper), a man who finds himself caught between a woman he thought he had moved beyond, and a woman who represents all of the possibilities yet to come.

Taking the lead role of Aloha as Brian Gilcrest is four-time Oscar® nominee Bradley Cooper[1]. In his performances in Silver Linings Playbook[4], American Hustle[5], and most recently, American Sniper, Cooper has shown the versatility to move seamlessly between comedy and drama, often hitting the poignant tone that defines so much of Cameron Crowe’s work.

Emma Stone[6] stars as Senior Captain/Major Select Allison Ng, an overly efficient, no-nonsense Air Force F-22 pilot who, as part of her career broadening, is assigned to be Gilcrest’s official handler during his mission. Although she confesses she would have played any role in the film to have the chance to work with the director, the character of Captain Ng thrilled her. “There are so many facets to what’s happening with her, it was like finding a gold mine. She’s a great example for women – she’s a fighter pilot, she’s sensitive, and is in love for the first time.” she explains.

Prior to production, Stone trained with several advisors to execute the multitude of tasks her character has to perform in the film – from hula dancing to guitar playing to learning the proper protocols and cadence of an F-22 pilot. She also trained with a local flight school instructor to learn to manipulate the controls of the twin-engine propeller plane, a Piper PA-44 Seminole, her character uses to shuttle herself and Gilcrest from Oahu to the Big Island.

Gilcrest’s relationship with Ng will only move forward if he can reach a closure on his past – including his ex, Tracy, played by Rachel McAdams.  When McAdams first read the script, she instantly recognized that the character of Tracy was like nothing she’d ever come across before. “She was a complicated, interesting woman with lots on her plate, at a very important time in her life,” she says. Having also worked with Bradley Cooper ten years ago on the smash comedy Wedding Crashers, McAdams says, “It was such a wonderful thing to come to work with Bradley every day”

“Filming in Hawaii affected all of us,” says Bradley Cooper. “It’s so specific; the energy’s different. The people, the climate, the feeling, the isolation – it’s really wonderful. There’s beauty everywhere.”

“The spirit of Hawaii is unlike any place I’ve ever been,” adds Emma Stone. “You’re in the middle of the Pacific Ocean and there are ghosts, there’s mana, there’s the Menehune, there are the Night Marchers. When you’re on the island, you feel completely immersed in its power and spirit.”

Once Crowe had written the screenplay, Production Designer Clay Griffith was charged with finding the suitable Hawaii locations. Griffith has been working with Crowe for 25 years, first as the director’s assistant on Say Anything, then as a set decorator on Singles and Jerry Maguire, and, finally, as production designer on Almost Famous, Elizabethtown, We Bought a Zoo, and now Aloha. Griffith arrived in Honolulu three months before filming began and immediately set off on daily location scouts with supervising location manager John Panzarella to find places to show Crowe and director of photography Eric Gautier.

With this in mind, the filmmakers collaborated with the Department of Defense and the Air Force to obtain permission to shoot at Hickam Field, the 2,850-acre military base that is headquarters for the Pacific Air Forces, Thirteenth Air Force and the 15th Wing. In the end, nearly half of the film’s production would shoot at the base. The production was also able to use an F-22 Raptor fighter jet and a C-17 cargo plane, though only in stationary, non-active duty.