Through a series of misunderstandings, Alvin, Simon and Theodore come to believe that Dave is going to propose to his new girlfriend in Miami…and dump them. They have three days to get to him and stop the proposal, saving themselves not only from losing Dave but possibly from gaining a terrible stepbrother. 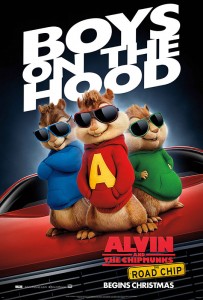 In 2007, ALVIN AND THE CHIPMUNKS, a global phenomenon to generations of fans, became a live action/CGI motion picture event with a contemporary comic sensibility.  In the holiday season blockbuster, which grossed over $350 million worldwide, songwriter Dave Seville transformed singing chipmunks Alvin, Simon and Theodore into pop sensations.

Before you could say, “Alvinnnnn!!!” talks began about a new ALVIN AND THE CHIPMUNKS movie.  Not content to rest on their laurels, the ‘Munks came up with yet another “first”: a “Squeakquel,” in which Alvin, Simon and Theodore finally meet their match – and maybe more – in the newly arrived female trio, The Chipettes.  Released in 2009, ALVIN AND THE CHIPMUNKS: THE SQUEAKQUEL grossed over $440 million worldwide.

Two years later, the Munks unleashed ALVIN AND THE CHIPMUNKS: CHIPWRECKED. Now, it’s time for the boys to hit the road in their biggest journey yet, as they embark on a “road chip” across the U.S.

Says director Walt Becker: “The Chipmunks have grown up a little because this film is about finding your way and getting out on your own. We set out to make a movie that adults and kids would enjoy.”

Becker credits producers Ross Bagdasarian and Janice Karman, who created the characters and are custodians of the Chipmunks legacy, with helping him and screenwriters Randi Mayem Singer and Adam Sztykiel find a new path for Alvin & Co.“Ross and Janice gave me a thorough history lesson and personality profiles on the Chipmunks,” the director recalls. “But they also encouraged me to take the characters in a slightly different space and give the film a different tone from the others.” Becker did ensure that a key presence in all the ALVIN films — Jason Lee, as Dave Seville – was back for THE ROAD CHIP. “It was important to bring back Jason because not only is he terrific in the ALVIN AND THE CHIPMUNKS movies, his presence helps gives this film a strong emotional connection.”

In Alvin and the Chipmunks: The Road Chip, Dave’s career as a musical artist manager has taken off, thanks to the Chipmunks.   He also has an exciting new client – a rising young pop star, named Ashley, played by actress/singer/author/model Bella Thorne.

There’s also a lot of humor mined from the guys’ cross-country odyssey. It begins when Miles smuggles the ‘Munks aboard a flight, where everything goes wrong. In flight, they meet a new foe – a TSA Agent named Suggs, played by recent Emmy® winner Tony Hale. Hale appreciated the opportunity to tackle a different kind of role ifor the film. He explains: “I’m usually the guy, in ‘Veep’ or ‘Arrested Development,’ for example, who takes the abuse. Well, Suggs takes the abuse, but he keeps on fighting and never stops trying to take down the Chipmunks. It’s a lot of fun playing the villain.”

“The opportunity to experience new locations through the Chipmunks’ eyes is very compelling,” notes Becker. Additionally, “Everybody remembers family trips, which can be equal parts adventures and tortuous experiences, so that’s very relatable.”

Alvin and the Chipmunks: The Road Chip shakes things up, musically. Each stop on the ‘Munks’ and Miles’ quest has its own special character and different musical influence – from modern, hip-hop/country vibe of an Austin, Texas bar to the great jazz, blues and funk of New Orleans, and finally to the Latin flair of Miami.

Continuing a soundtrack tradition for the series, Alvin and the Chipmunks put their own delightful new spin on smashes including “Uptown Funk,” “Turn Down For What,” and more. In addition, Redfoo and the boys trade verses on “Juicy Wiggle (Munk Remix).” The soundtrack also features Sheppard’s platinum-certified international hit “Geronimo” and The Score’s “Oh My Love.”

Mark Mothersbaugh is the composer and the executive music producer is Alana Da Fonseca.