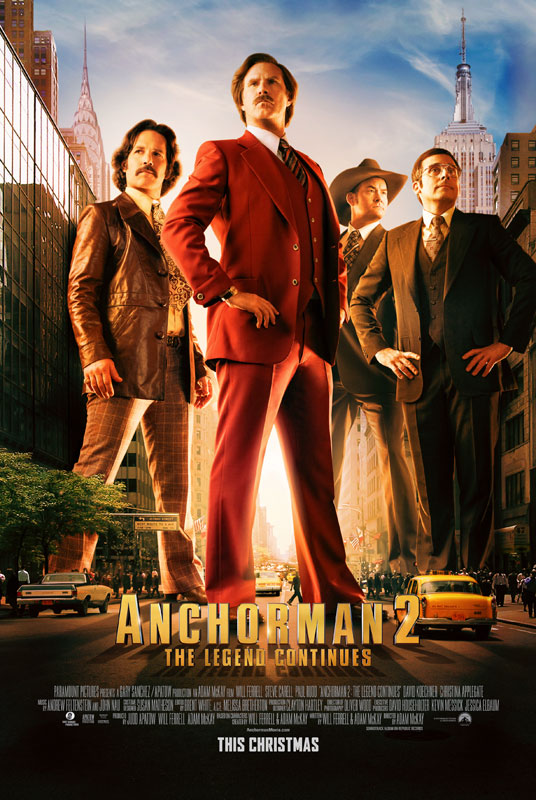 Dylan Baker was an actor always on the radar for Ferrell and McKay, who had wanted him for a role in the original Anchorman, though Baker was unavailable due to a television commitment.

Seven years after capturing the heart of his co-anchor and wife, Veronica Corningstone (Christina Applegate), Burgundy (Will Ferrell) is offered the chance of lifetime: to be in on the world’s first 24-hour global cable news network, GNN, in New York City.

By 2010, with several projects completed together in between, Ferrell and McKay began considering a sequel. Anchorman 2 Director/Co-writer/Producer Adam McKay and Star/Co-writer/Producer Will Ferrell have apparently always shared one comedic brain.  “We think the same things are funny – and that’s half the battle,” says Ferrell. The two easily finish each other’s lines while writing, Ferrell explains.  “He’ll throw lines out, and that triggers thoughts in my head, and we’ll just feed off each other, back and forth,” he explains.  “It so was so easy and fun to work together, that we eventually just said, ‘Why don’t we try writing a script?’  That’s how it started.”

A table read was held in Los Angeles in November 2012, with most of the cast in attendance (except for Rudd and Carell, who were working on other projects, other comics subbing in their stead). “I couldn’t believe the security on this,” Rudd laughs.  “I had to sign a form and read the script on a computer (before the table read), and then it just vanished after a couple of hours.  But when it did show up, I started reading it immediately and was just cracking up!”

Working with this group of comic actors was still a challenge, even for the veteran Dylan Baker.  “There were scenes when I’d just be sitting there crying, I was laughing so hard,” he says.

The network boss is an inspired Australian by the name of Kench Allenby (“Kench” short for “Ken,” of course).  “He’s our Ted Turner meets Rupert Murdock meets Richard Branson,” describes Ferrell.  “He’s like all three of those guys if they had a baby.”

Australian native Josh Lawson plays the boisterous Kench.  “He’s a multi, multi, multi-millionaire who had this idea to start a 24-hour news initiative,” the actor explains.  “He’s a real moneyman.  He inherited three hundred million dollars from his dad, and he’s worked his whole life to turn that into three hundred and five million, so he knows the value of the dollar.”

“It was pretty surreal to have that many big stars willing to play the way we play,” Ferrell comments.  Adds Marsden, “That’s the barometer of how popular this has become, truly.”

The result is not only the most ridiculous news team fight ever presented on the big screen, but a memorable event for all involved.  “One of our stars told me, ‘It’s like a Vanity Fair party, except fun,” Koechner relates.  “It was like comedy summer camp.”