Apollo 18 is a 2011 horror film directed by Gonzalo Lopez-Gallego and produced by Timur Bekmambetov with an estimated budget of $5,000,000. It will be Lopez-Gallego’s first English-language film. 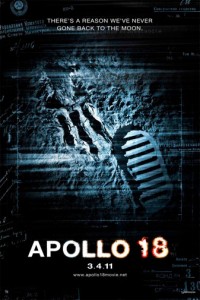 Apollo 18 was shot in Vancouver, British Columbia and stars actors Lloyd Owen and Warren Christie.However it has been promoted as a “found footage” film that does not use actors.

In an interview with Entertainment Weekly, Dimension Films head Bob Weinstein denied the film was a work of fiction, stating that “We didn’t shoot anything, we found it. Found baby!”. This claim was met with some skepticism. The film will be distributed by Dimension Films.

Apollo 18 is currently scheduled for release on September 2, 2011. Originally scheduled for March 2011, the film’s release date was moved three times in the first five months of the year (to April 2011, January 2012, and then August 2011). The September date was announced on June 1. The film’s trailer was attached to Scream 4.

Apollo 18 is a found footage-style film set in December 1973, about a post-Apollo 17 mission to the Moon that takes on a premise of why NASA discontinued the Apollo moon missions. The plot involves a government coverup of the Apollo 18 mission after parasitic lifeforms on the Moon discovered the crew and began to attack them.