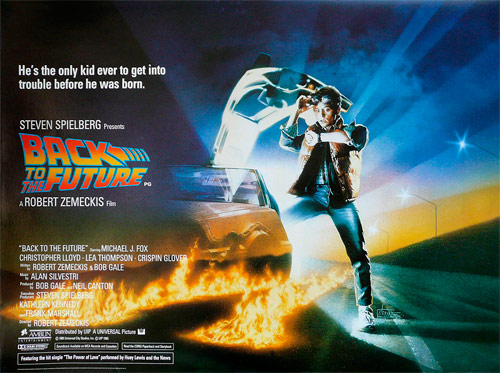 Back to the Future is a 1985 science-fiction comedy film directed by Robert Zemeckis, written by Zemeckis and Bob Gale, produced by Steven Spielberg, and starring Michael J. Fox, Christopher Lloyd, Lea Thompson, and Crispin Glover. 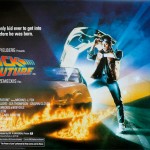 Following Stoltz’s departure, Michael J. Fox’s schedule during weekdays consisted of filming Family Ties during the day, and Back to the Future from 6:30 pm to 2:30 am. He averaged five hours of sleep each night. During Fridays, he shot from 10 pm to 6 or 7 am, and then moved on to film exterior scenes throughout the weekend, as only then was he available during daytime.

The film tells the story of Marty McFly, a teenager who is accidentally sent back in time from 1985 to 1955. He meets his parents in high school, accidentally attracting his mother’s romantic interest. Marty must repair the damage to history by causing his parents to fall in love, while finding a way to return to 1985.

Zemeckis and Gale wrote the script after Gale mused upon whether he would have befriended his father if they attended school together.

Various film studios rejected the script until the box office success of Zemeckis’ Romancing the Stone, and the project was set up at Universal Pictures with Spielberg as an executive producer.

Initially the role of Marty McFly was offered to singer Corey Hart but he declined and Eric Stoltz was originally cast as Marty McFly when Michael J. Fox was busy filming the TV series Family Ties. However, during filming Stoltz and the filmmakers decided that Stoltz was miscast, so Fox was approached again and he managed to work out a timetable in which he could give enough time and commitment to both; the subsequent recasting meant the crew had to race through reshoots and post-production to complete the film for its July 3, 1985 release date.

When released, Back to the Future became the most successful film of the year, grossing more than $380 million worldwide and receiving critical acclaim. It won the Hugo Award for Best Dramatic Presentation and the Saturn Award for Best Science Fiction Film, as well as Academy Awards, and Golden Globe nominations among others. Ronald Reagan even quoted the film in the 1986 State of the Union Address.

In 2007, the Library of Congress selected it for preservation in the National Film Registry, and in June 2008 the American Film Institute’s special AFI’s 10 Top 10 acknowledged the film as the 10th best film in the science fiction genre.