Ice Cube and Cedric the Entertainer are reunited in “Barbershop: The Next Cut,” directed by Malcolm D. Lee. It’s been more than 10 years since our last appointment at Calvin’s Barbershop. Calvin (Cube) and his longtime crew, including Eddie (Cedric), are still there, but the shop has undergone some major changes. Most noticeably, the once male-dominated sanctuary is now co-ed. The ladies bring their own flavor, drama and gossip to the shop, challenging the guys at every turn. 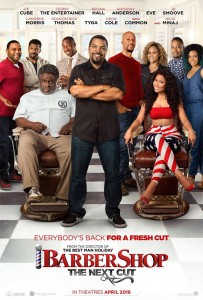 In the role of Jalen’s high school principal, the filmmakers paid homage to Chicago with an inspired and unexpected choice, casting Elizabeth Dozier, the former real-life principal of Chicago’s Christian Fenger Academy High School and a local celebrity in her own right.

Director Malcolm D. Lee, writer/director of the crowd-pleasing “Best Man” films, takes the helm on this third chapter of the “Barbershop” franchise, but was a fan first. “There’s a wealth of humor in the ‘Barbershop’ movies,” he says. “There’s warmth, camaraderie and emotion, so it’s very relatable and people enjoy being part of it. It’s a microcosm of the community; a familiar, communal place where people talk about what’s bothering them or what they’re passionate about. It may push the envelope in some instances, but that’s what people are talking about. A lot has happened since the first ‘Barbershop’ movie and I think the time was right to put a fresh spin on it.”

“We’re just talking about real stuff,” says Nicki Minaj, joining the cast as Draya, one part sweet sass to two parts vamp. Or is it the other way around? “I wouldn’t have done it if I didn’t fall in love with the script. One of the things that interested me was that it felt like a realistic conversation from beginning to end.”

Mindful of capturing that Mars/Venus charge to full comic advantage, the filmmakers paired two of their favorite writers on the script: Kenya Barris and Tracy Oliver.

In addition to Ice Cube, Cedric the Entertainer, Regina Hall and Nicky Minaj, Eve returns as Terri, now trying to balance her career and parenthood, with her husband and co-worker Rashad – played by Common, a newcomer to the “Barbershop” repertory.

“We have an incredible cast who come from a variety of disciplines, including rappers, comedians, writers, television and film actors,” Lee says. “They were all hired for what they excel at. So, as a director, part of my job is to know that when a comic genius like Cedric, for example, starts on a roll, you just let him do what he does best. I’m not going to put any restriction on that kind of talent.”

Other newcomers include JB Smoove as slick entrepreneur One-Stop; Lamorne Morris as the shy and analytical Jerrod; Margot Bingham as Bree, a stylist with mega relationship issues; and Tyga as a local gangbanger named Yummy. Anthony Anderson reprises his role as the semi-reformed ATM thief J.D.; Deon Cole returns as Dante, the customer who never goes home; and Sean Patrick Thomas is former barber Jimmy, now an aide to the mayor, who still drops in to get a cut and take the pulse of the old neighborhood.

Production designer Ina Mayhew took on the challenge of recreating the space to look authentic and familiar to audiences, while incorporating enough change to acknowledge it’s been more than a decade since our last appointment at Calvin’s.

Everything had to be designed, sourced or built from scratch as nothing remained of the original set, not even the focal-point mural of Calvin’s father in his glory days that hangs behind Calvin’s chair and serves to remind him, every day, what this shop meant to its founder and to the community. That mural was repainted from a photo of the original.

Photos formed the cornerstone of Mayhew’s research, as well as meticulous viewings of footage from the earlier films, primarily the first, which director Lee used most as a touchstone for the story’s nostalgic elements. At the same time, myriad details contemporize the space, within realistic limits. “Malcolm didn’t want it looking too rag-tag or distressed,” Mayhew says.

Vintage barber chairs were one of the toughest components to secure. This was no surprise to the designer, who began canvassing months before filming began. “It’s one of those things that seems so simple but is actually one of the hardest,” she says. “Red was particularly scarce. We scoured the country. Luckily, there was a place in Atlanta that reproduced or refurbished chairs, so we got several from him, and others we found in antique stores in three different cities. Every part of the set, whether it was the chairs or getting the right clippers and making them contemporary within a budget, took a lot of wheeling and dealing.”

The barbershop set was constructed twice: once outside and once inside. Its original Chicago location doesn’t exist anymore but, scouting new locations in Atlanta, Mayhew and the production team found a block that matched the low profile of buildings on the outskirts of Chicago and set up shop. A roomy used furniture store, with its contents temporarily relocated, served as Calvin’s. Not only were its large front windows close enough to the original to require minimal reconstruction, but the adjacent buildings also worked and there were empty structures and lots across the street where an entire façade could be built and visible from inside the shop. Once this was accomplished, the shop, street and façade were recreated on stage.

Additional practical sets included a grocery up the street from the barbershop exterior, for a scene where Yummy faces off with a rival gang, and Calvin’s house in a nearby residential tract. Though not requiring much interior modification, the home’s uneven driveway was re-paved for a scene in which Calvin and Jalen have a heart-to-heart while playing basketball. The high school where Calvin and Jennifer meet Jalen’s principal was a vacant high school in Atlanta often used for film and television shoots, and in fact there was another crew on site until almost the minute they needed it, forcing Mayhew’s team to prep for the scene overnight.

“Barbershop: The Next Cut” features a score from Grammy Award-winning, jazz and R&B maestro Stanley Clarke, with piano and keyboard contributions from fellow Grammy winner Robert Glasper. Additionally, the film incorporates a spectrum of what Lee calls “songs that are familiar to people, in the background, supporting the scenes.” From Earth, Wind & Fire and Luther Vandross classics to CeeLo Green and emerging hip-hop artist Lizzo, “Music plays a tremendous role. Any time you go into a barbershop there’s music playing.” The film also showcases the new song “Real People,” performed by Ice Cube & Common.