Barney’s Version is a 2010 Canadian drama film directed by Richard J. Lewis, based on the novel of the same name by Mordecai Richler. The film was nominated for the Golden Lion at the 67th Venice International Film Festival. 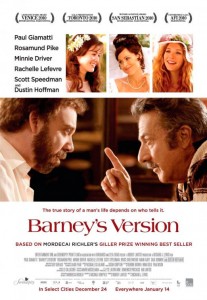 Barney’s Version is the picaresque and touching story of the politically incorrect, fully lived life of the impulsive, irascible and fearlessly blunt Barney Panofsky.

Barry Panofsky is one of the great comic characters of modern literature. Mordecai Richler gave him life as an impulsive, romantic, politically incorrect and fearlessly blunt creature subject to his impulses. And now, Paul Giamatti adds flesh and blood, and a vast emotional range in this immensely enjoyable adaptation directed by Richard J. Lewis.

Shifting seamlessly between the highs and lows of his life in Montreal as an adult philanderer, and his coming of age in seventies Italy, Barney’s Version follows its hero as he seeks solace through marriage and professional success. His first wife, Clara (Rachelle Lefevre), is an unstable free spirit Barney meets through his best friend, the promising but self-destructive novelist, Boogie (Scott Speedman). When his relationship with Clara ends in tragedy, Barney returns to Montreal, establishes himself as a successful television producer running Totally Unnecessary Productions, and marries into society through the good graces and welcoming charms of The Second Mrs. P (Minnie Driver).

But Barney never knows when to leave well enough alone. At his wedding to Mrs P., he meets and falls madly for the true love of his life, Miriam (Rosamund Pike), who is destined to become his third wife. His dad (Dustin Hoffman) gives him a gun as a wedding present and, well, no need to spoil the plot, but when Barney is implicated in Boogie’s mysterious disappearance, the spectre of the past raises its ugly head.