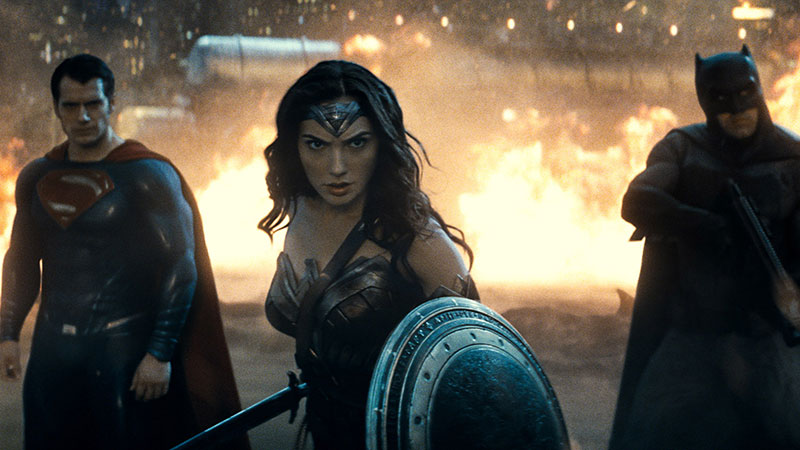 Fearing the actions of a god-like Super Hero left unchecked, Gotham City’s own formidable, forceful vigilante takes on Metropolis’s most revered, modern-day savior, while the world wrestles with what sort of hero it really needs. And with Batman and Superman at war with each other, a new threat quickly arises, putting mankind in greater danger than it has ever known before. 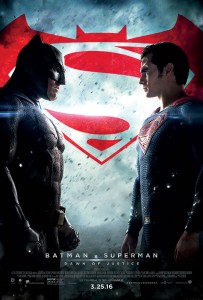 Costume designer Michael Wilkinson, who designed the Superman suit from “Man of Steel,” was eager to revisit it and to have the opportunity to work on both Batman and Wonder Woman as well.

Batman and Superman. Gotham and Metropolis. Lex Luthor, Doomsday and—for the first time ever on the big screen—Wonder Woman. With its stellar lineup of heroes and villains and bigger and better battles with even more at stake than the destruction of the Earth, Zack Snyder’s “Batman v Superman: Dawn of Justice” is an epic Super Hero journey like no other.

“When we started talking about what would be Superman’s challenge for this next movie, we knew we couldn’t find bigger physical stakes than the destruction of the Earth,” Zack Snyder says, “so we had to make the emotional stakes higher. And who is a more worthy foil for a philosophical war than Batman? Once you say that out loud, it’s hard to go back.”

The filmmakers not only brought the figurative worlds of Batman and Superman together for the first time on film, but their physical worlds, too. Of course, along with Batman comes the Batcave; super-cool, super-stealth vehicles, the Batmobile and the Batwing; and his cache of self-forged weaponry. Geographically, Gotham City and Metropolis were re-envisioned as sister cities-cum-cross-town rivals, with only a minor body of water between them, allowing for action to take place on both heroes’ turfs. But it’s a non-resident of either locale—one who comes with her own unique set of tools—who drops in to make an unforgettable impression on both heroes: Wonder Woman.

“Once we had Batman in the story, all I could think was, ‘Is it crazy to bring Wonder Woman in, too?’” Zack Snyder recalls. “For me, as a longtime fan, Superman, Batman and Wonder Woman are the comic book trinity, and I knew movie audiences have been dying for Wonder Woman. I thought it would be amazing to include her as a way to introduce the character into this world.”

Director Zack Snyder states, “We felt an interesting way of beginning this story was to examine Superman from another perspective, Batman’s perspective. Bruce doesn’t know who Superman is; all he knows is what the public knows. ”

To convey Batman and Luthor into Superman’s newly established world in an organic way would require careful handling. “Everyone wants to see Batman and Superman in a film together, and everyone wants to see them fight,” says producer Deborah Snyder. “It’s a thrill for anyone who loves comics, and Zack is not only a director but a huge comics fan as well.”

To carry Lex Luthor into 2016, screenwriter Chris Terrio recalls asking himself, “What would a capitalist gone mad look like today?” Looking for real-world inspiration from many of the world’s largest high-tech corporations, he found an environment that “often cultivates eccentricity as a virtue and rewards outside-the-box innovation.” Adding those qualities to a damaged psyche, he re-imagined Lex as “a younger, brilliant, post-modern villain aware of his own villainy who has chosen to use his wealth and power to bring down one whose own power appears limitless.”

Also returning from the previous film, Laurence Fishburne steps back into the shoes of Daily Planet editor Perry White. “The first day I was back on set, it felt like no time had gone by at all,” Fishburne smiles. The actor was thrilled to be a part of the new film with the additions of Batman and Wonder Woman.

Of course with Batman in the mix, another indispensable addition to the lineup is Alfred, Bruce Wayne’s closest confidant and partner in fighting crime. Jeremy Irons took on the reinvention of the role, stating that “Zack immediately talked to me about a slightly more hands-on version of the character, one who came from a military background and was very capable with electronics and so forth.”

It was for the role of Wonder Woman that the filmmakers felt perhaps the greatest responsibility when it came to casting. “Wonder Woman had just turned 75 years old, and we really felt it was time for her to grace the big screen,” declares producer Deborah Snyder. “We searched all over the world, we looked at hundreds of actors for the role,” she continues. “When we met Gal Gadot, it was unanimous among us that she was special, that she personified Wonder Woman.” Gadot’s first day on set as the heroine had an impact on everyone, especially one very young visitor—the niece of a crew member who had drawn a picture for Wonder Woman. “This sweet little girl gave me a beautiful picture she had drawn for me,” Gadot recalls, “and people just started to cry.”

With Wonder Woman at all times are her tiara, her Amazonian bracelets, and her lasso of truth, sword and shield. Designed and manufactured under the careful eye of property master Doug Harlocker, the sword, like Superman’s chainmail, surreptitiously incorporates a portion of the Joseph Campbell quote admired by director Zack Snyder—this time, etched in Venetian text into the grooves of the blade. An eagle, which is an integral motif in the character’s lore, decorates the uppermost part of the sword, and also sits, faded and almost ghostly, upon the front of her well-worn shield.

The role of Batman required Ben Affleck to appear intimidating enough to go up against Superman. “It was important to me that Batman be bigger because Superman is infinitely stronger than the best that humanity has to offer,” explains director Zack Snyder. “Theoretically, the best that man can do is still nothing in the face of Superman, but I wanted him to look like he stands a chance. Ben is 6’4”; with his boots on he’s 6’6”. And he’s handsome, smart, charismatic and mature. For the road-weary Batman that we wanted, Ben was perfect.”

Production took place in and around Detroit, Michigan, with some scenes accomplished in the Chicago, Illinois, area, and scenes at the Clark family farm filmed once again in nearby Yorkville. With Zack Snyder’s preference for the practical, much of the movie was shot on location or on large builds, the largest set being the Batcave, a feat of engineering that would impress the most daring architect.

The cave is composed of a series of cubed spaces connected by a floating staircase and surrounded by glass walls that are suspended using a spider system, which is a series of brackets that hold up the glass, only at the bottom and top. The brackets are held by steel pipes, painted to disappear into the dark slate color of the untouched cave walls. Water flows down the cave wall and into a small pond beneath a bridge, between two glass cubes. The effect is that of glass cubicles squeezed inside an existing cave. The designer was going for a feeling that is organic, minimalist and claustrophobic, built by a man who has become one with his animal nature yet feels crushed by it.

The Broad Museum at Michigan State University in East Lansing doubled for Lex Luthor’s mansion; the Wayne County Courthouse, built just after the Civil War, was used for sequences in both Gotham and Washington, DC; and the old Grand Central Station was the setting for a climactic battle scene. The film also shot briefly in New Mexico, which stood in for North Africa, and Bora Bora, which became an island in the Indian Ocean.