Beastly is a fantasy romance film based on Alex Flinn’s 2007 novel of the same name. It is a retelling of the fairytale Beauty and the Beast set in modern-day New York City. The film is written and directed by Daniel Barnz and stars Vanessa Hudgens, Alex Pettyfer, Mary Kate Olsen, Neil Patrick Harris and Lisa Gay Hamilton. The plot focuses on Kyle Kingson, a handsome man with an evil streak, who disrespects a classmate, who is a witch in disguise, during an environmental event. The witch then casts a spell on Kyle and physically transforms him into a grotesque monster. 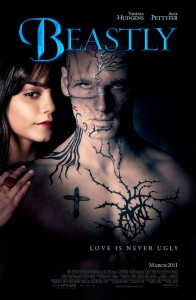 Beastly is a modern-day take on the “Beauty and the Beast” tale where a New York teen is transformed into a hideous monster in order to find true love.

The film is based on Alex Flinn’s 2007 supernatural romance novel of the same name, and has been in production since CBS Films bought the rights in December 2007. In February 2009, it was announced by CBS Films President and Chief Executive Officer Amy Baer that Daniel Barnz would direct and write the screenplay. This is one of the first projects to be put into development by CBS Films. Susan Cartsonis is producing the film through Storefront Films, and Roz Weisberg is co-producer. Initially, the executives hoped for a late 2008 theatrical release; however, the WGA strike delayed that possibility.

Baer expressed excitement about the director, saying, “Daniel’s fresh vision makes him one of the most exciting directors of his generation. We are thrilled to partner with him as he brings his unique voice to arguably the most universally resonant myth in storytelling.” Barnz anticipated bringing an indie sensibility to Flinn’s story. “It’s a very commercial idea that I get to tell in a highly artistic fashion,” he said.

In writing the script, Barnz was inspired by the films Say Anything keeping the experiences of teenagers in mind while still basing the screenplay on the novel. He “immediately fell for it, because [he] saw that there was an amazing opportunity to tell a modern version of this fairytale and [he] loved the idea of it.” Barnz remarked that he was happy to see the story told through the beast’s perspective and that it focused more on the romance than the supernatural.

Beastly is one of the first feature films to be produced and distributed by CBS Films. It has a budget of $20 million for filming and marketing. Production began on June 13, 2009 in Montreal, Quebec, Canada. and ended in August of the same year. The first clip of the official “Beastly” trailer was filmed in Chicago, shooting Walter Payton College Prep High School as Buckston Academy High School. Old Montreal and Laval were used as filming locations, as well as the Mount Royal Park in Montreal, which served as Central Park in New York and other outdoor locations. Local Montreal diner Place Milton is also featured as Cafe Santiago. Filming was done in 45 days.

The Quebec government announced on June 12, 2009 that it was increasing its tax credit for foreign producers making films and TV shows here from 25 per cent of labour expenses to 25 per cent of the entire budget of productions shot here. Beastly was one of the film productions who chose to film in Montreal before the announcement of tax-paying increase.

Hudgens left for Montreal to film following the MTV Movie Awards. “I’m laid-back about it,” she said. On June 4, 2009, Hudgens and Pettyfer arrived in Montreal. Neil Patrick Harris also went to Montreal to shoot his scenes, and at the same time, for his lead role in an independent film. Hudgens was the first to wrap shooting in order to promote the film Bandslam. Re-shoots were conducted in 2010 due to the push back of the film’s release.

The first teaser trailer was released on November 20, 2009 during the previews of New Moon. The 23-second teaser received reactions and comments from commercial sites. Annie Barrett of Entertainment Weekly remarks that “Alex Pettyfer is giving off more of a (Disney pretty-boy) Gaston vibe than the Beast here.” A holographic poster was posted in some selected theaters before. The first official poster was then released in early April 2010. A featurette video which includes clips from the film was released in early February 2010. The full-length trailer premiered last April 19, 2010. There was a new trailer released in late 2010 featuring a new logo, the new date, and the song Broken Arrow by Pixie Lott.