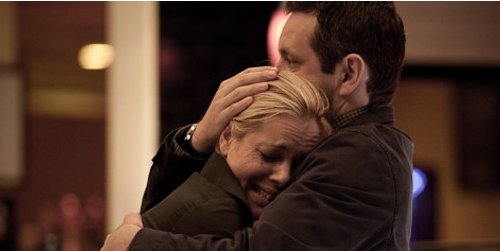 Beautiful Boy is a drama film starring Michael Sheen, Maria Bello, Alan Tudyk, Moon Bloodgood, Kyle Gallner, Meat Loaf. The rated R movie is the feature debut for writer/director Shawn Ku. An unconventional love story that explores the journey of a married couple on the verge of separation, who must live with unimaginable heartbreak, and find healing through the darkest days of their lives. 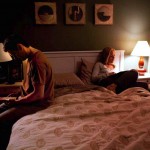 Beautiful Boy is about a married couple on the verge of separation are leveled by the news their 18-year-old son committed a mass shooting at his college, then took his own life.

Bill and Kate hopelessly try to find some hint of an explanation after finding out that their only son committed a mass shooting at his university before taking his own life. They struggle numbly through the funeral, the media onslaught, and the awkward pity from relatives and friends. Their already strained marriage is tested as they realize all they have left with each other is their shared grief and confusion — and the unfortunate legacy of their son.

This life-altering event forces Bill and Kate to face their feelings of guilt, rage, blame, self-discovery — and ultimately hope — so that they can finally see each other and their chance for happiness again with clear eyes.

Writer-director Shawn Ku wowed the Sundance Film Festival with his student short film, Pretty Dead Girl, which went on to win awards at festivals throughout the world. It is currently being developed into a full-length stage production with the Araca Group (“Urinetown,” “Wicked”).

He was signed to direct at Warner Bros while still a student at USC Film School and was later nominated for a DGA Award for his work as director and co-choreographer of “The American Mall,” an MTV musical film by the producers of the Disney Channel’s “High School Musical” trilogy. He has worked with such respected producers as Marc Platt, Michael London and Christine Vachon.

Shawn earned his undergraduate degree in chemistry from Harvard University, but left the sciences to become a Broadway performer in Tony Award-winning shows “Fosse,” “Miss Saigon,” and “The King and I,” among others. As an actor, he won a Jury Prize at AFI Fest for his performance in the lead role of the internationally acclaimed feature Samsara, which premiered at the 2001 Toronto International Film Festival on 9/11.