Before I Go To Sleep is a thriller based on the worldwide best-selling novel about a woman who wakes up every day remembering nothing—the result of a traumatic accident in her past—until one day, new terrifying truths emerge that force her to question everyone around her… 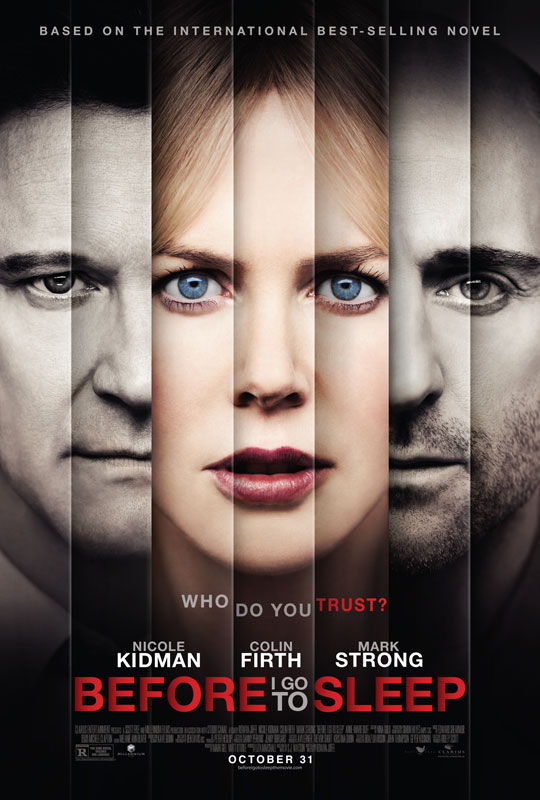 Nicole Kidman admits she’s a huge fan of writer-directors. There’s a flexibitlity she admires in their ability to rewrite the script as the physical process of performing the role takes shape.

A tip-off from a friend in the publishing world first alerted producer Liza Marshall to an exciting new book, which had just been delivered. It was early 2010 and Marshall, the head of film and TV at Scott Free London, the UK production company owned by Ridley Scott, managed to get hold of a proof copy of the book called Before I Go To Sleep by S J Watson. “It was completely brilliant,” recalls Marshall, who was previously head of drama at UK broadcaster Channel 4. “I read it in one sitting.”

UK director Rowan Joffé first read Watson’s novel while on holiday in Portugal. “I was so enthused I started telling the story to my wife. I then became aware various other members of my family had stopped splashing about in the pool and were all listening to the story. From that moment on I got the bug and felt I absolutely had to make this.”  Joffé recalls. The filmmaker also felt a personal connection to the story as his mother had suffered amnesia following a brain haemorrhage 10 years earlier.

The role of Christine is a demanding one as the character is in every scene and voyages through tremendous highs and lows. To keep the audience engaged by the character, it was imperative to attract a high-calibre actress to the role. Academy Award-winner Nicole Kidman had tracked the project from an early stage after reading Joffé’s script. “From the minute I read the script it got under my skin,” says Kidman.

This is the second time Kidman has worked with her co-star Colin Firth. She was delighted to have him join the project having just completed Railway Man together. “For me, I get to play opposite one of the greatest actors in the world, so I’m always like, offer Colin everything!” she laughs. Kidman’s co-stars, Colin Firth, who plays Christine’s husband Ben, and Mark Strong, who plays Dr Nasch, praise the actress’s phenomenal technique. “The way Nicole works is chasteningly authentic,” reveals Firth. “I feel like I have to be at the top of my game. I can’t lie.” The two actors worked with Joffé on the script at Firth’s home and over Skype with Kidman. “As a writer-director it’s a fantastic experience when an actor engages with a screenplay to the extent they want to bring stuff to it,”

As the world of Before I Go Sleep moved from the printed page into the visual medium of cinema, the team had fun with the locations and used them to play into Christine’s, and our, sense of dislocation. The book is set in London but the film transfers the story to somewhere vague and much more isolated to reflect Christine’s state of mind. The house itself is very much a character in the film.

“When we were working in pre-production, we talked a lot about the kind of house they should live in,” Marshall explains. “In the book it’s a Victorian terraced house in Crouch End. As I read the book, I thought that wasn’t very cinematic. With Rowan, we looked at every architectural style in London, from big white stucco houses in Notting Hill to tower blocks in Borough. We finally found this fantastic, late 1960s house, just outside of London. What drew us to the house was that we could be anywhere.”

The exterior of the house was shot in Surrey, southwest of London. Further location shoots took place around London with location manager Jason Wheeler intent on finding unusual shots of London.