The latest film from writer-director John Carney, Begin Again is a soul-stirring comedy about what happens when lost souls meet and make beautiful music together. Gretta (Keira Knightley[1]) and her long-time boyfriend Dave (Adam Levine) are college sweethearts and songwriting partners who decamp for New York when he lands a deal with a major label. 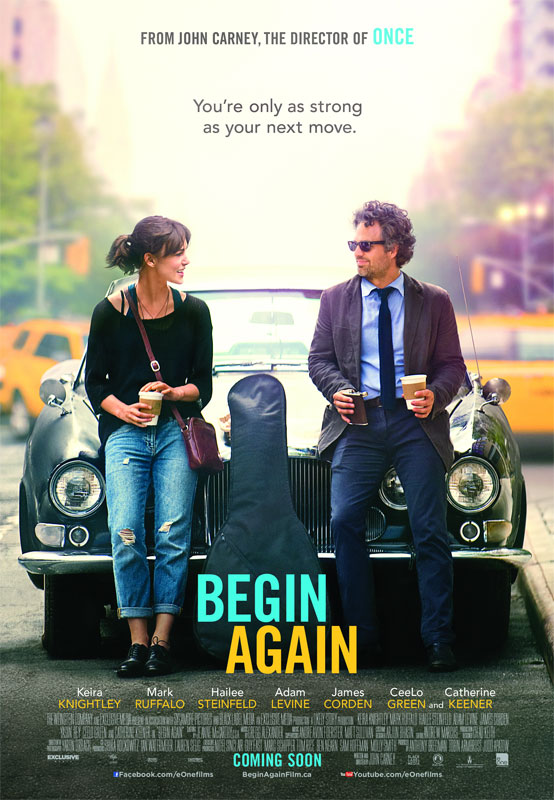 “The film is a love letter to New York City, written by an Irishman who lives in Dublin,” says producer Anthony Bregman.

For Carney, the idea for the film originated in the relationship between Gretta and her musician boyfriend Dave. “I wanted to do something with the idea of a couple who work together in the same area of the arts, and what happens to the relationship when the playing field stops being level and one of them takes off. What happens to intimacy and trust and loyalty when fame comes along?” At the same time, Carney drew upon his own past as a professional musician to flesh out the story’s possible complications.

With a strong and uniquely powerful script, Carney was able to attract a compelling mixture of newcomers and seasoned veterans from many walks of the entertainment industry. “What we have is an incredible mix,” observes producer Anthony Bregman.

Indeed, the challenge of casting actors like Knightley not known for their singing talents, and singers (like Levine and Green) who have very little experience acting, might have been daunting to many filmmakers. But cast and crew alike agree that the combination and collaboration has proved productive, if not magical.

Co-star Knightley admits she is best known for her costume dramas and period films. “My character has pretty much died in everything I’ve done for the last five years,” she jokes. “I decided I’d like to do something where I didn’t have to go through heavy emotional turmoil and die, if at all possible. There’s a touch of emotional turmoil in this, but in the end I found it to be incredibly hopeful. It’s rare to find pieces of work that are so full of hope.”

Making the film look as good as it sounds proved to be an equally daunting challenge. “New York is a huge character in the film, so it was interesting scouting locations and figuring out where we wanted the band to record the songs,” explains production designer Chad Keith.

Executive Producer Sam Hoffman continues: “We would go location scouting, and we’d find a place and I’d think it was great. And John would say, ‘you’re doing it again, you’re scouting with your eyes? What is it about this place that would make you want to record an album here?’ We had to scout with our ears, which is something a director has never asked of me before.”

The special location, great characters, and talented ensemble made Begin Again a unique production experience for all concerned. But for many of the cast and crew, their passion for the project comes back to that special connection they each have with the power of music to change one’s life and inspire greatness in both spirit and deed.