Bernie is an American comedic film directed by Richard Linklater, and written by Linklater and Skip Hollandsworth. The film stars Jack Black as Bernie Tiede, Shirley MacLaine as the elderly widow, Marjorie Nugent, and Matthew McConaughey as the local District Attorney. It made its world premiere as the opening night film of the 2011 Los Angeles Film Festival. 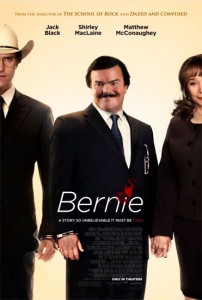 Owners of the Hawthorne Funeral Home in Carthage, Texas, where Bernie Tiede met Marjorie Nugent, refused to allow the film to use the name of the funeral home in the movie.

Bernie is based on a 1998 Texas Monthly magazine article by Hollandsworth, “Midnight in the Garden of East Texas,” that chronicles the 1996 murder of 81-year-old millionaire Marjorie Nugent in Carthage, Texas by her 39-year-old homosexual companion,Bernhardt “Bernie” Tiede. Nugent was shot in the back four times with a rifle by Tiede, who confessed to the 1996 murder. According to the Amarillo Globe-News, police searched Tiede’s home and found many videotapes showing Tiede “engaging in homosexual acts.” Tiede admitted the murder to police in August, 1997 and was sentenced to life in prison.

Back in December of 1998, I read Skip Hollandsworth’s Texas Monthly story about Bernie Tiede, Marjorie Nugent, and the town of Carthage and something just clicked.  It’s hard to articulate what exactly draws one to a particular story, and what would compel one to undertake the often lengthy and often fruitless task of trying to make a movie out of a real life story.  Maybe it was my being a native East Texan and feeling like I knew everyone involved.  Maybe it was Bernie’s unique character and the complex relationship between him and Marjorie. He played roles in her life from chauffer to chef to best friend and confidant. Maybe it was the interesting legal proceedings that were playing out at that time.  Maybe it was what I saw as the dark humor surrounding the entire story.  I called Skip and we started talking about how it might work as a movie.

I optioned the rights, and not long after we were attending some of the trial, where I would first see the real Bernie, Danny Buck, Scrappy, the many visitors from Carthage and the jurors from San Augustine where the trial had been moved.  It all ended for Bernie in the opposite way it felt it was going at the time of the article. In the movie, it is overly apparent during the trial that those on Bernie’s side truly believed that he had done nothing wrong and didn’t deserve to be punished. One witness even says “It’s not as bad as people say; he only shot her four times, not five.”

In an interview with Linklater published on June 17, 2011, the director told IndieWire that the screenplay he co-wrote with Skip Hollandsworth was a boring read, and that “the gossip element almost kept the film from being made, because it reads boring. I said, “But they’ll be funny characters. I could just imagine the accents.”

The making of the film, based on an article in Texas Monthly magazine by Skip Hollandsworth, who also co-wrote the comedic film with Linklater, has divided many of the citizens of Carthage, Texas, the small town in East Texas where the Nugent murder occurred. In the film, Linklater includes interviews with several Carthage residents about their feelings of support for Bernie Tiede. Some citizens hope the film will stimulate an increase in tourism, while others have voiced anger that a comedy film was derived from the events surrounding the murder of an 81 year-old woman.