Directed by Katie Aselton and written by her husband Mark Duplass, Black Rock, was filmed on location off the coast of Maine, where beautiful imagery is interplayed with a host of horrors as the three friends try to make it out alive. 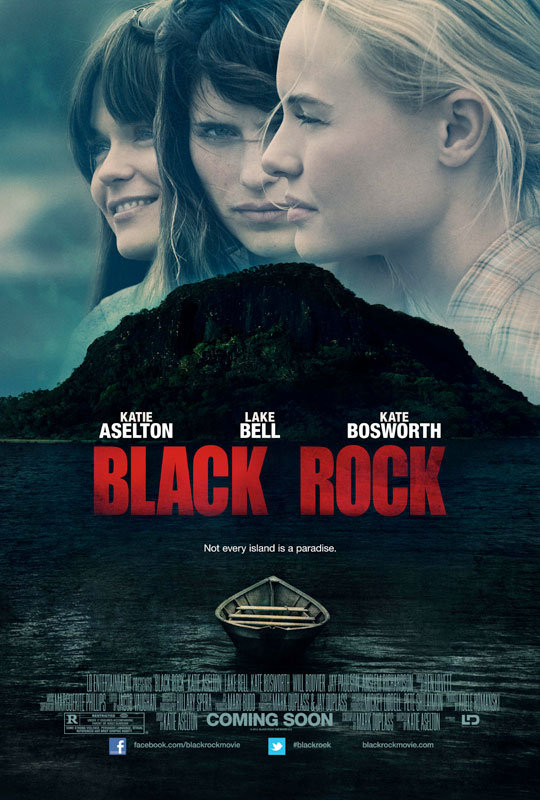 The island’s inherent beauty was nonetheless the source of countless spectacular shots captured by cinematographer Hillary Spera, who had worked previously with Aselton on “Freebie.”

One idea had been tossing around in Katie Aselton head. “What’s the worst thing that could happen if you went camping with your friends?” she asks. “Well, something paranormal – I don’t think that’s gonna happen.” The worst thing would be something going horribly wrong, rooted in a huge miscommunication. “Then the shit hits the fan, and you have to fight for your life – and it becomes the struggle of who wants to live more.”

Aselton batted the story around for a while, placing a trio of friends in different locations, but never got through the story. It wasn’t until Christmas 2010, when she and Mark, were visiting her childhood hometown of Milbridge, Maine, and went out for a walk in the snow with a bottle of wine, that the story finally came together.

Mark Duplass found himself trapped in a weather-induced 18 hour layover on his way back to L.A. – and took the time to churn out a script for Black Rock on his laptop. “By the time he got back to Los Angeles, there was a pretty awesome script,” Aselton says. The story is centered around three childhood friends who, on the instigation of one, come together for a camping trip on one of their childhood haunts, a secluded, empty island called Black Rock.

Portraying Lou is actress Lake Bell and director Katie Aselton plays Abby. Bell had been friends with Aselton and Duplass for a number of years.

It wasn’t lost on Aselton that her DP – as well as her producer, composer, and other key players on the film – were women. “I love the idea of this being a girl-power movie,” she says.