James (James Allen) and his friends Peter (Brandon Scott), Ashley (Corbin Reid) and film student Lisa (Callie Hernandez) venture into the same woods each with a camera to uncover the mysteries surrounding their disappearance. At first the group is hopeful, especially when a pair of locals Lane (Wes Robinson) and Talia (Valorie Curry) offer to act as guides through the dark and winding woods. But as the endless night wears on, the group is visited by a menacing presence. Slowly, they begin to realize the legend is all too real and more sinister than they could have imagined. 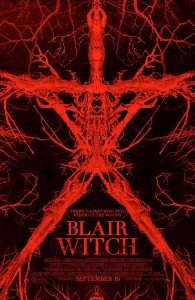 To ensure the story would appeal to those unfamiliar with the first film, the team used Jess Calder as a litmus test.

The Blair Witch Project, which premiered in 1999 to become a global phenomenon, created lasting lore around our timeless fear of being alone in the woods. The nearly no-budget film grossed millions and set the gold standard for found footage movies, spawning a new generation of horror fans.

When director Adam Wingard and screenwriter and longtime collaborator Simon Barrett were promoting their 2013 horror anthology film V/H/S/2 at Sundance, talk turned to Blair Witch. “As fans, we were asking when they were going to do another Blair Witch because it seemed like the time. But they didn’t really have any answers,” says Wingard. “Cut to a week later, and Simon and I are at a meeting at Lionsgate.”

For several years, Lionsgate had been searching for the right concept to reboot Blair Witch, as well as filmmakers who could satisfy the fans of the first film and reach a new generation of moviegoers. Following the success of V/H/S and the company’s acquisition of Wingard and Barrett’s independent horror movie You’re Next[2], Lionsgate set up a secret meeting with the duo to pitch the sequel.

“We knew that Adam and Simon had a total mastery of the horror genre and could simultaneously honor the original movie while making something completely groundbreaking and terrifying for 2016,”says Jason Constantine, Lionsgate’s President of Acquisitions and Co-Productions.

To hold true to the Blair Witch mythos, Barrett familiarized himself with every hint of information the first film contains, from old message boards and Facebook groups to graphic novels and young adult books published only in Europe. “The mythology was a huge enticement for me because the first film never really explained anything,” says Barrett.

To play James, who was only 4-years-old when his sister Heather vanished, filmmakers looked no further than television actor James Allen McCune, who was excited to explore this fascinating character. McCune was thrilled to work with Wingard. “Adam is an incredible visual director,” says McCune. “He has such a specific eye for what he wants. We did a good 63 takes of a scene just to get it perfect, and I think that’s the kind of attention to detail that people are really going to appreciate.”

To help create the performance he wanted, Wingard used an unusual tool to signal a jump scare.
“We were shooting a scene where I’m reacting to some noises outside. We couldn’t use actual sounds of trees falling or what the audience will hear in the final product,” explains McCune. “So to signify that something scary was happening, Adam honked this air horn right next to the tent, which is possibly the silliest noise you could hear in the middle of a very dramatic scene. But it was unbelievably startling so my reaction is very genuine.” Wingard would also play disturbing music or sounds of chanting between scenes.

To play documentary film student Lisa, filmmakers turned to Callie Hernandez. Hernandez was eager to act in a found footage film. “As a performer, it’s a brand new way to shoot something,” says Hernandez. “Typically, the camera’s not supposed to be there — it’s not supposed to infringe on the scene you’re shooting. Whereas this time, the camera was actually a part of the scene.”

When seeking who to play James’s loyal and logical friend Peter, filmmakers sought out Brandon Scott and to play Ashley, Peter’s not-so outdoorsy girlfriend, filmmakers sought out newcomer Corbin Reid. “At first, I didn’t know what I was auditioning for; ‘The Woods’ was just a code name,” Reid recalls. After landing the role, filmmakers took Reid behind closed — and locked — doors and revealed she’d signed on for the Blair Witch. “I had no idea,” she says. “It was a total surprise.”

Shot over 32 days in British Columbia, in and around Vancouver, the filmmakers strived to capture the authentic spirit of The Blair Witch Project, including recreating the forest setting. “Finding the right location in the Pacific Northwest was difficult because the trees and landscape in that part of the world look significantly different to those in Maryland where the first film was shot,” explains Wingard. “We scouted a long time until we found one piece of land that fit our requirements for that type of wildlife, and we were able to fashion all these intersecting trails to make it appear seamless.”

The filmmakers also sought to give fans a smoother, yet one-of-a-kind cinematic experience.
“Audiences complained about the first movie’s shaky cam, but that’s what made it so scary and real,” says Wingard. “We knew we couldn’t get away with that, especially with the mainstream horror audience we were going for. It was always a combination of how to retain that aesthetic but make it easier on the eyes.” To retain that authenticity, the cast often performed directly into a camera lens and lit much of the movie themselves.

“They didn’t light up the woods in the original film, so I wanted to light this movie with flashlights,” says Wingard. The drone camera took the format even further.

Still, the sequel poses more questions than answers and avoids using CGI for scares. “There’s actually no CGI in this film in terms of anything you’re seeing that’s creepy in the woods,” explains Wingard. “We built everything; what you’re seeing in the film is actually all there.”