A portrait of outspoken indie-rock hero Bob Forrest, from his life-threatening struggle with addiction to his transformation into one of the most influential and controversial drug counselors in the US  today. 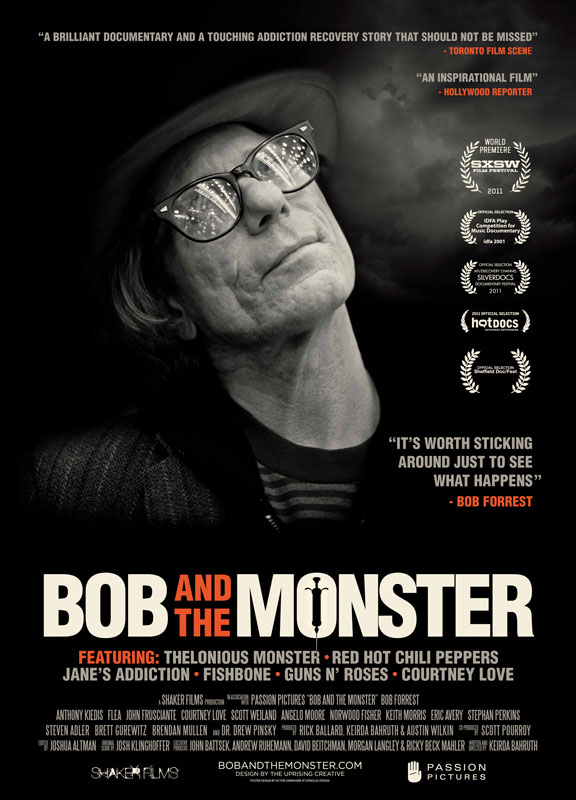 “Sex, drugs, and rock and roll: a tired cliché. But not in the hands of Keirda Bahruth who weaves these elements together in her new Oscar-worthy documentary BOB AND THE MONSTER. The net is a film that tells of private heartbreak and musical genius, grotesque demise and irrepressible hope—and an actionable new direction for drug and alcohol recovery for our addicted to addiction times.” Heroinlife.com

BOB AND THE MONSTER crafts contemporary footage, animation and compelling interviews with rare archival performances and exclusive personal videos from Bobʼs past to reveal the complex layers of this troubled, but optimistic soul. Testimony from his peers, including Courtney Love, Anthony Kiedis, Flea, John Frusciante, members of Janeʼs Addiction, Fishbone and Guns nʼ Roses add texture, but itʼs the depth of Bobʼs music, interwoven throughout the film, that illuminates this unforgettable and truly inspirational story.

Director Keirda Bahruth has spent six years filming Bob Forrest and depicts a fascinating portrait of an intrepid soul whose passion for living and self-discovery is evident in both his failures and successes.

The film traces his extraordinary life, from a traumatic childhood event through decades of poverty and drug addiction; numerous menial jobs and an unlikely rise to stardom with his band Thelonious Monster; then back again through homelessness, 22 drug rehabs and jail; to his unexpected transformation into an acclaimed drug and alcohol counselor who now dedicates his life to helping fellow musicians recover from addiction.

BOB AND THE MONSTER transcends the stereotype of heroin addicted rock star and reveals a more personal message. Bobʼs story is a living testament to the heights of human courage and the ability to shape your own destiny.

BOB AND THE MONSTER premiered at the 2011 SXSW Film Festival and has since played such prestigious festivals as Hot Docs, Sheffield, Silverdocs and many more.

“It took a total of 6 and half years to complete. Most of that was out of economic necessity, which in the end benefited the film greatly because this would have been an entirely different film if I had found financing in 2004.” – director Keirda Bahruth