Bridesmaids is an American comedy directed by Paul Feig and produced by Judd Apatow, Barry Mendel, and Clayton Townsend. 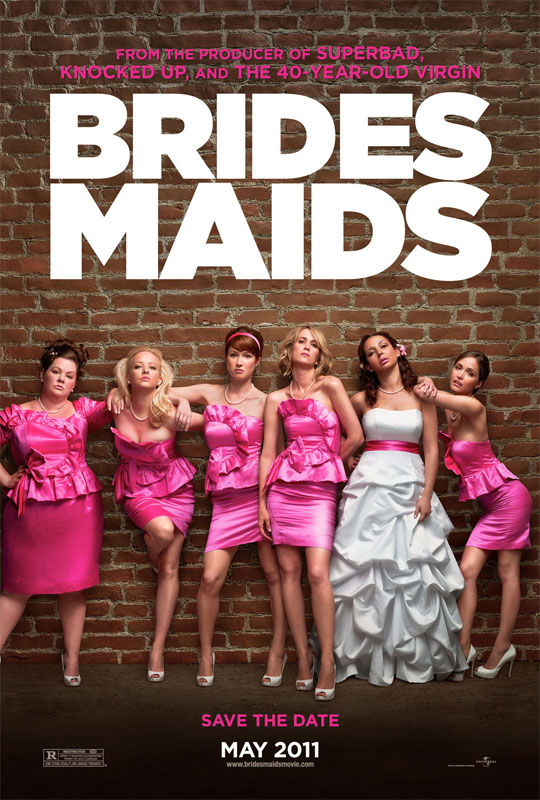 In Bridesmaids, picked as her best friend’s maid of honor, lovelorn and broke Annie (Wiig) looks to bluff her way through the expensive and bizarre rituals with an oddball group of bridesmaids.

Bridesmaids was produced by Apatow Productions and will be released by Universal Pictures. Wiig cowrote the script. This will be the final film appearance of Jill Clayburgh, whose death from leukemia in November 2010 occurred before the film was released.

Kristen Wiig leads the cast as Annie, a maid of honor whose life unravels as she leads her best friend, Lillian (Maya Rudolph), and a group of colorful bridesmaids (Rose Byrne, Melissa McCarthy, Wendi McLendon-Covey and Ellie Kemper) on a wild ride down the road to matrimony. Annie’s life is a mess. But when she finds out her lifetime best friend is engaged, she simply must serve as Lillian’s maid of honor.

Though lovelorn and broke, Annie bluffs her way through the expensive and bizarre rituals. With one chance to get it perfect, she’ll show Lillian and her bridesmaids just how far you’ll go for someone you love.