In a broken city rife with injustice, ex-cop Billy Taggart (Mark Wahlberg) seeks redemption – and revenge – after being double-crossed by the city’s most powerful figure, the mayor (Russell Crowe).   Billy’s relentless pursuit of justice, matched only by his streetwise toughness, makes him an unstoppable force – and the mayor’s worst nightmare. 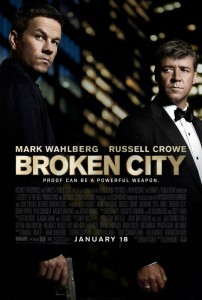 In Bronken City, several hundred extras gathered as protesters of police corruption and injustice, in front of a courthouse during Billy’s trial, which filmed on the stairs of the New York City Supreme Court at One Center Street. Councilman Valliant’s press conference pledging hope for the working class, was shot at the Tweed Courthouse at 52 Chambers.

Broken City protagonist Billy Taggart is one of Mark Wahlberg’s richest screen roles. “The film’s script reminded me of those smart, character-driven crime thrillers that I grew up watching and loving,” says the Oscar-nominated actor.

“The film really respects the audience’s intelligence,” notes Catherine Zeta-Jones, who portrays the mayor’s wife, Cathleen, who is much more than she seems.

Broken City was shot on location in New York and, due to production logistics, in New Orleans, the latter doubling for the Big Apple. “Broken City is a New York movie in the classic sense that we shot most of the exteriors in New York.,” director Allen Hughes explains.  “Our production designer, Tom Duffield, maintained a consistency from New York into New Orleans, and there was definitely a cohesion that was remarkable.”

Brian Tucker’s taut screenplay had an impressive pedigree, having earned a spot on The Black List, an industry clearinghouse for the best, yet-to-be-produced screenplays.  “It has a lot of great action, twists and turns, and a dynamic narrative, but more important than that is its characters,” explains director Allen Hughes.  “Billy Taggart jumped off the page as being very layered and challenging.”

Broken City fits squarely within the impressive body of work from Allen Hughes.  He and his brother Albert – known professionally as The Hughes Brothers – are renowned for their gritty, no-holds-barred films that place dynamic characters in challenging, if not impossible situations.  Their films include Menace II Society and Dead Presidents.