Bucky Larson: Born to Be a Star is a comedy film. It is produced by Happy Madison Productions and distributed by Columbia Pictures. Adam Sandler, Allen Covert, and Nick Swardson wrote the script and directed by Tom Brady. The movie stars Nick Swardson, Christina Ricci, Don Johnson, Stephen Dorff. 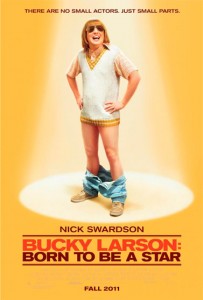 Bucky Larson: Born to Be a Star is produced by Happy Madison Productions and distributed by Columbia Pictures.

Before Bucky was born to be a star, the idea for the movie was born in the brain of Adam Sandler, who co-wrote and produces the film. Swardson tells the tale: “We were on the set of another movie when Adam grabbed me and said, ‘Hey, I have an idea for a movie – a guy whose parents are porn stars.’ Well, of course, I thought it was funny and said I’d love to do it. He kicked it around and a couple of months later, I get the call from Sandler – we’re doing the movie. It was hard work, but a lot of fun writing it with him and bringing the characters to life.”

As Sandler, Swardson, and Allen Covert worked on the screenplay, they brought to life their creation: Bucky Larson, a gentle, naive kid still searching for his future. When he accidentally finds out his parent’s secret, he isn’t shocked – instead, he finds his whole life and fate suddenly coming into focus: he’ll follow in the family business. “Bucky is an innocent, young kid from the Midwest who’s never even kissed a girl” says Swardson. One night, his buddies show him a stag film and they find out that his parents are the stars. He suddenly thinks that following in their footsteps is his destiny – and travels to Hollywood to seek his fame and fortune.

Bucky Larson: Born to Be a Star is Swardson’s first lead role after playing supporting parts in several movies, especially with Happy Madison, including memorable supporting parts in Grandma’s Boy and The Benchwarmers and You Don’t Mess with the Zohan and Just Go With It.

Starring opposite Swardson as Kathy, Bucky’s best and only friend in L.A., is Christina Ricci. Kathy’s goal in life is to be a waitress at a really good restaurant – but she had that job once and it didn’t work out, says Ricci. She’s been traumatized, and only Bucky can teach her to get over her fear.

Bucky’s parents are played by veteran actors Edward Herrmann and Miriam Flynn. They had previously worked together on episodes of the television programs Grey’s Anatomy and The Practice, but this was a chance to really get to know each other – up close and personal, you might say.

Bucky Larson: Born to Be a Star has been rated R by the Motion Picture Association of America for pervasive crude sexual content, language, and some nudity.