Deep in the forests of the Pacific Northwest, isolated from society, a devoted father (Viggo Mortensen) dedicates his life to transforming his six young children into extraordinary adults. But when a tragedy strikes the family, they are forced to leave this self-created paradise and begin a journey into the outside world that challenges his idea of what it means to be a parent and brings into question everything he’s taught them. 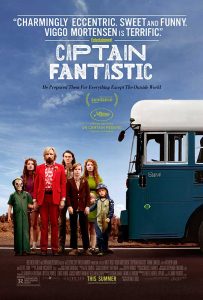 Viggo Mortensen arrived on set weeks early so he could be involved in shaping the location. He brought ideas about the design of the garden and helped with planting as well. Production designer Russell Barnes created the rough-and-ready Cash compound from the ground up, paying particular attention to making sure everything in it was based in reality.

For Matt Ross, the writer and director of Captain Fantastic, the story is an exploration of the choices that parents make for their children. “I’m fascinated by all the issues that revolve around parenting,” Ross says. “Ben has given up the outside world and whatever personal ambitions it held for him to devote his life to being the best father he thinks he can be. The question becomes: is he the best father in the world or the worst? Is what he’s doing insane or insanely great?”

Some of the Cash family’s experiences have roots in Ross’ own upbringing. “My mother was interested in alternative living situations,” he says. “When I was a kid, it wasn’t called living ‘off the grid,’ but we did live in communes in Northern California and Oregon. We were in the middle of nowhere without television or most modern technology.”

Also a producer of Ross’s first feature film,28 Hotel Rooms, Lynette Howell Taylor says she admires the director’s approach to filmmaking. “Matt’s long history of success as an actor has made him an excellent director,” she explains. “When you get in a room with Matt, there’s a warmth and an energy there. As an actor, you know it will be safe to experiment. It’s always a collaborative experience with him, as opposed to, ‘Here’s your script, say your lines, and thank you very much.’ That is part of what enabled us to get a such strong cast on the film.”

“We first got the project in early 2014 and it was an instant go on our side,”adds producer Shivani Rawat, CEO of ShivHans Pictures. “Seeing Matt Ross’s determination and all the work he had put into this film was inspiring. It was one of those scripts we couldn’t turn down.”

As Ben, Viggo Mortensen provides a rock-solid center for his family– and the film. “Whatever character Viggo plays, he makes the audience believe that it’s him,” says Rawat.

The actor, who complements his successful film career with equally impressive work as a musician, a writer, a photographer and a painter, became intimately involved in the development of the film as soon as he signed on. “Viggo was a central collaborator in terms of his ideas about the script,” says Ross. “He had wonderful and insightful ideas about everything, including adding his own original music to the film. For me, he exemplifies a very high level of artistry and integrity. That is one of the things that made him my first choice to play Ben. Physically and temperamentally, he was absolutely right.”

The actor turned out to be far better prepared for the role than Ross even hoped. The director sent Mortensen a huge box of booksof recommended reading, including texts by Tom Brown, the renowned naturalist and author of Tom Brown’s Field Guide to Wilderness Survival; linguist and philosopher Noam Chomsky; and Pulitzer Prize-winning scientist and writer Jared Diamond, all of which he felt Ben would be intimately familiar. “I thought that was a great way to frame some of the knowledge that this family would have,” Ross says. “It turned out Viggo had read all the books already.”

Finding the six extraordinary young actors who play the Cash family required a worldwide talent hunt, with submissions coming in from Great Britain, Australia, the U.S., Canada and New Zealand. To play characters ranging in age from 7 to 18-years-old, the filmmakers sought out actors willing and able to learn skills including rock climbing, hunting, martial arts, foreign languages, archery and more. They needed to be able to handle language ideas well above their grade level. They had to be able to handle comedy as well as drama. And the kids had to be believable as siblings and as Mortensen’s offspring.

Eldest son Bo, played by British actor George MacKay, has reached a point in life where he longs to break away from the family. MacKay was immediately captivated by the script. Next in line are Bo’s 15-year-old twin sisters, Vespyr and Kielyr, played by Annalise Basso and Samantha Isler. Basso, who grew up in rural Missouri, feels a definite kinship with her character. “I was also homeschooled for a while,” she recalls.

Played by Australian actor Nicholas Hamilton, 12-year-old Rellian is the rebellious child, constantly questioning the choices his parents have made for him and his siblings. Shree Crooks, who plays Zaja, says she loves the idea of living in the wild with a big family. “That was one of my favorite parts of the movie. I live in L.A. but I love nature and the thought of surviving on my own.” The youngest child, Nai,played by Charlie Shotwell, is only seven. “He is kind of a nudist,” says Shotwell.

All of the young actors attended wilderness camp to acquire some of the basic skills they would need to survive in the forest. “They were taught how to make a fire, skin a deer, track an animal and rock climb, as well as basic martial-arts skills,” says Ross.“Annalise and Samantha learned Esperanto. Shree learned a little about taxidermy. They didn’t have to become experts, but they had to learn enough to look like they knew what they were doing.”

The director also provided them with a reading list, including Lies My Teacher Told Me: Everything Your American History Textbook Got Wrong by James W. Loewen and The People’s History of the United States by Howard Zinn.

The far-ranging action of Captain Fantastic spans approximately 1,500 miles from the rain-soaked forests of the Pacific Northwest to the high desert of Albuquerque, as well as the winding highways in between. Filming began in and around Seattle and traveled throughout the state of Washington before embarking on a real-life road trip that mirrored the odyssey of the Cash family.