In 1973, after two bankruptcies and an acrimonious divorce, the ever-determined Hilly Kristal (Alan Rickman) borrowed money to buy the Palace Bar, a watering hole for the indigent of what was then New York’s seething skid row. Hilly had a dream. He wanted to give a stage to live musicians, albeit Country, Bluegrass and Blues musicians. Thus the acronym CBGB. 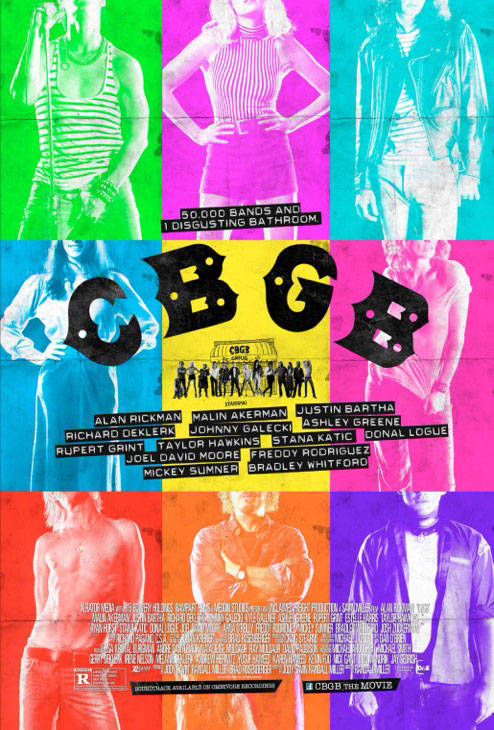 Since closing in 2006, the real CBGB has been converted into a high-end men’s clothing store, so a replacement needed to be found. The interior seen in the film was a reconstruction built in a studio in Savannah

Randall Miller and Jody Savin stumbled upon the details of Hilly Kristal’s story while doing research on other projects and were immediately intrigued by his journey. It is a serio-comic tale of a man whose dreams are denied but instead of wallowing in disappointment he embraces the events that happen in lieu of his dream and ultimately achieves something greater.  Kristal’s CBGB becomes the cornerstone of an entirely new movement in rock music and American pop culture. What Hilly respects above all else is originality and passion, things the New York underground was teeming with.  The artists need a forum in which to present their work.  CBGB becomes that forum.  Art happens.  Art evolves.

After researching the history of CBGB and the New York punk scene, they knew they had to speak to John Holmstrom, founder of Punk Magazine, the very publication that gave the movement its name and its visual correlative.

Miller and Savin enjoy working with a steady team of longtime collaborators.  Casting director, Rick Pagano, is on board for life.  This is the third time he has put together an extraordinary cast for Miller and Savin.

This is production designer Craig Stearns’ third movie with Miller and Savin. Says Miller, “Craig is very in demand as a production designer. I had to get down on my knees and beg him to turn down bigger movies and take another ride with me on the indie train.” The begging paid off in spades. Stearns is a master at transforming existing locations into ideal film sets. “I have never met another production designer who can build such extraordinary sets on a budget,” says Savin.

Alan Rickman completed filming CBGB, in which he stars as Hilly Kristal, founder of the legendary New York punk-rock club, as well as Lee Daniels’ THE BUTLER, in which he portrays President Ronald Reagan.

With the exception of some exterior scenes in New York City, the entire production was shot in Savannah, Georgia. A group of storefronts were used to recreate the 315 Bowery of the 1970’s and its neighboring businesses like the Palace Hotel, the club’s upstairs neighbor. Shots were filmed with carefully selected lenses and movement, as, for instance, a pan too far to either side would have revealed a skyline quite different from the Big Apple’s, but the illusion is pulled off admirably.