The story follows a one-time bullied geek, Bob (Dwayne Johnson[1]), who grew up to be a lethal CIA agent, coming home for his high school reunion. Claiming to be on a top-secret case, Bob enlists the help of former “big man on campus” Calvin (Kevin Hart), now an accountant who misses his glory days. But before the staid numbers-cruncher realizes what he’s getting into, it’s too late to get out, as his increasingly unpredictable new friend drags him through a world of shoot-outs, double-crosses and espionage that could get them both killed in more ways than Calvin can count. 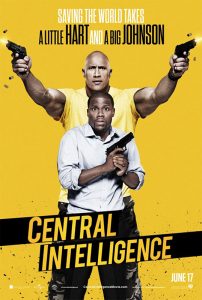 Facial replacement technology allowed young dancer Sione Kelepi (aka Sione Maraschino to his legion of Vine fans) to play the hapless Robbie as a high school student. Kelepi’s face digitally assumed Johnson’s features for the scene, but the dance moves were all his own.

The movie also plays on a reversal of expectations – both for its main characters and the actors who bring them to life.

“What really caught my attention and appealed to me was the idea of taking this premise and flipping it on its ear,” says Johnson, “putting me in more of the comedy role and putting Kevin, one of the world’s most successful comedians, a guy who’s just on fire, in more of the straight role. So we’re both thrown into a scenario where we have to stretch and work some different muscles, and then somewhere it all intersects and we meet in the middle.”

“I’m pretty much the straight man in this film and Dwayne carries the comedy load, which we thought would be refreshing and fun, and something different,” adds Hart.

Referencing the stars’ 12-inch height differential as an ongoing visual punch line, Rawson Marshall Thurber, a successful comedy director marking his first foray into the action realm, recalls their first meeting prior to production. “They may be different shapes and sizes but they’re cut from the same cloth. Seeing them sitting across the table from each other or standing side by side, I mean, it’s just a layup.” Thurber also wrote the film’s screenplay, with Ike Barinholtz & David Stassen.

“I like being the boss lady,” says Amy Ryan of her role as the hard-boiled agent, Agent Harris. From the moment Bob re-enters Calvin’s life the agency is just a step behind him, led by the relentless Harris, who tries to strong-arm Calvin into helping capture the man she describes as a dangerous, mentally unbalanced, rogue agent who is just using him.

Starring as Bob’s former partner, Phil, is Aaron Paul. Phil was killed just as the two were closing in on the Black Badger and now Phil reappears in Bob’s memory, as Bob obsessively relives their final case and final moments together. “Phil is the catalyst,” says Paul.

The filmmakers chose Danielle Nicolet who plays Maggie, Calvins wife, with an eye toward casting someone who could absorb her co-stars’ formidable energy and bounce some of it back. Likening the experience to “being thrown into the deep end of the pool,” she says, “The only thing more intimidating than having to be funny next to Kevin Hart is to throw a little Dwayne Johnson in the room while you’re at it. It’s not easy to keep up, but they were both incredibly generous collaborators.”

Rounding out the main cast, Tim Griffin and Timothy John Smith suit up as Agent Harris’s primary subordinates, agents Stan and Nick, respectively, who can dish out almost as much abuse as they take; and Ryan Hansen is Steve, Calvin’s unctuous colleague at the accounting firm.

One of the film’s memorable stunt pieces is a bullpen shootout at Calvin’s office, where an absurdly composed Bob leads the apoplectic Calvin through a gauntlet of destruction, against a phalanx of CIA agents who quickly infiltrate the space in a no-holds-barred attempt to bring him down. The longest continuous sequence in the film, it took six full days to stage and shoot, and culminates in a mid-air exit off the 20th floor – accompanied by Bob’s triumphant rebel yell and a range of less enthusiastic sounds from Calvin.

Additional stunts included numerous explosions and skirmishes with armed assassins, vehicle chases, a plummeting plane, and a fight between Bob and a motorcycle, employing moves that Poppleton refers to as “bike-fu.”

In addition to the garage standoff, filmed at the Cambridgeside Galleria, the production used portions of the Boston Common Park and the footbridge at the Boston Public Gardens as rendezvous points. The Beverly Municipal Airport was the backdrop for a scene where Calvin tries to distract a supercilious clerk so Bob can hotwire a two-seater, and the entrance of the Bates Research Center at MIT became the formidable exterior of the CIA safe-site facility.