Chronicle is an  science fiction film directed by Josh Trank and written by Max Landis based on a story by both Trank and Landis. It stars Michael B. Jordan, Dane DeHaan, Michael Kelly, and Alex Russell, as a group of friends who gain powerful superhuman abilities, and use them for mischief and personal gain, until one of them begins to use their powers for darker purposes. 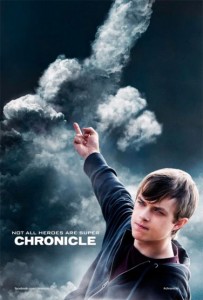 Most of the film is told through the point of view of Andrew, a troubled but creative young man with a keen visual eye and a high-quality HD camera.

“In most stories, superpowers are generally applied to good and evil, but in reality they’d be applied to necessity,” says Josh Trank, who makes his feature directorial debut and also co-wrote the story with Max Landis.  “And when you’re a teenager, necessity is really about making yourself happy.  You’d want to laugh and have a good time with those powers.”

Trank was determined that CHRONICLE wouldn’t be “your father’s P-O-V movie.  The story is very grounded; it’s not a fantasy or genre film; it’s a story about young people.  It’s about real teens and not caricatures of young people.  Their lives are anything but perfect.  We get into their world and discover their challenges, long before anything extraordinary begins to happen.  By the time the guys have obtained their powers, that element is so firmly woven into the story and characters that the film segues into an exploration of how they come to terms with those powers.”

Adds Max Landis, who wrote the screenplay based on his and Trank’s story: “I think CHRONICLE is going to give audiences an experience, from which they’ll leave the theaters, thinking, that’s exactly what I would have done if I had telekinetic powers.”

Producer John Davis notes that CHRONICLE is anything but “cookie-cutter,” and fills a need for bold, non-traditional storytelling that speaks to today’s audiences.  “It’s really fresh and different,” says Davis, who has known screenwriter Landis since the latter was a child.  “CHRONICLE represents a unique vision that has remained intact since Josh and Max first discussed the concept.  It takes familiar concepts, like superhero and ‘found-footage’ films, and takes them in new directions.”

Trank’s vision for CHRONICLE was meticulously…chronicled prior to the start of production.  Trank created previsualizations for every visual effect and camera angle, and wrote a detailed “Director’s Statement” outlining his plans, themes, and methodology.  Given the challenging nature of seamlessly marrying live action, stunts, visual effects and special effects, the pre-viz was a valuable guide for Trank’s department heads.