Conan the Barbarian, previously titled Conan 3D, is an upcoming 3-D sword and sorcery film based on the character Conan the Barbarian created by Robert E. Howard. It is a new adaptation, separate from the earlier 1980s Arnold Schwarzenegger films. The film is set to star Jason Momoa in the lead role, being supported by Rose McGowan, Stephen Lang, Ron Perlman, Bob Sapp and Rachel Nichols, with Marcus Nispel directing. 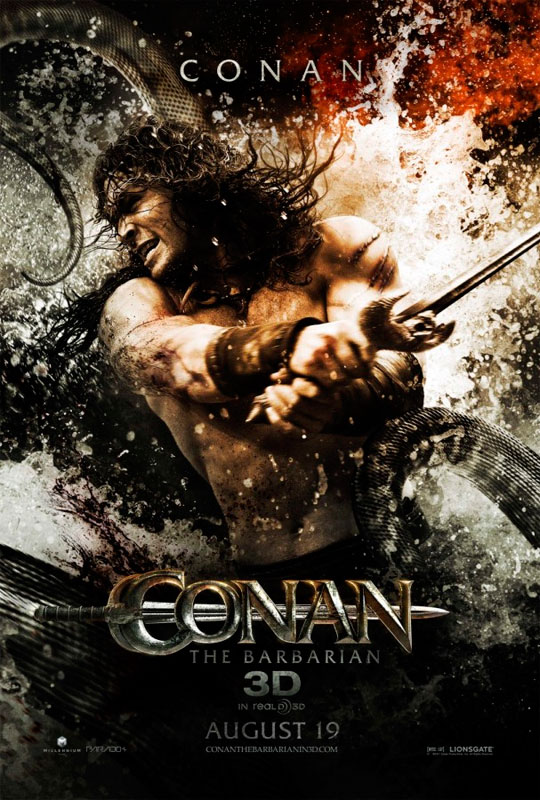 Conan The Barbarian tells the tale of Conan the Cimmerian and his adventures across the continent of Hyboria on a quest to avenge the murder of his father and the slaughter of his village.

The film had spent seven years in development at Warner Bros. before the rights were shifted to Nu Image/Millennium Films in 2007, with a clause wishing for immediate start on production. Lionsgate and Sony Pictures entered negotiations for distribution, with the film seeing many directors, prominently Brett Ratner, before settling on Nispel in 2009 and has since brought together a cast and crew. Filming began on March 15, 2010 and concluded on June 5, 2010. It stars Jason Momoa, Rachel Nichols, Stephen Lang, Rose McGowan, Saïd Taghmaoui, Ron Perlman, Leo Howard, Steve O’Donnell, Raad Rawi, Nonso Anozie, Bob Sapp, Milton Welsh.

After his father is murdered and village destroyed, Conan ventures into an unforgiving world where he survives as a thief, pirate, and warrior. On his path of wanton adventure and women, Conan chances upon the warlord responsible for his tribe’s destruction. As he tracks Khalar Zym, Conan battles monsters, Zym’s henchmen, and Marique, a powerful witch.

There had been talk in the late 1990s of a second Conan sequel following Conan the Destroyer, about an older Conan, set to be titled King Conan: Crown of Iron; however, due to Arnold Schwarzenegger‘s election in 2003 as governor of California, this project came to an end. Warner Bros. spent 7 years trying to get the project off the ground, with development attempts made by Larry and Andy Wachowski, John Milius, and Robert Rodriguez who was closest to completing development but left the project for Grindhouse. Boaz Yakin was hired in 2006 to start again, however, in June 2007 the rights reverted to Paradox Entertainment, though all drafts made under Warner remained with them. Paradox’s CEO, Fredrik Malmberg, told Variety “we have great respect for Warner Bros., but after seven years, we came to the point where we needed to see progress to production.” Paradox were auctioning the rights after and various groups took interest in producing, including New Line Cinema, Hollywod Gang, and Millenium Films.

Due to development-time frustrations felt when the rights were with Warner, Malmberg made deal terms where he was asking for $1 million for a one-year option, with another $1 million for each year’s renewal. In August 2007, it was announced that Millennium had acquired the right to the project in a unrevealed seven-figure deal, with Malmberg and Millennium’s Avi Lerner, Boaz Davidson, Joe Gatta, and George Furla set to produce. The deal was brokered by Gatta, who originally made the deal between Paradox and Warner in 2002. Production was aimed for a Spring 2006 start, with intention of having stories more faithful to the Robert E. Howard creation.

In November 2008, Brett Ratner was prematurely announced to be the director of Conan to The Hollywood Reporter by Lerner, something which displeased him as he pointed out “I am not doing Conan now. This is totally premature. For now, Conan is only a development deal. I have a deal at Paramount and I’m doing Beverly Hills Cop [IV] first, no matter what. Avi shouldn’t be telling you or anyone else in the press what I’m doing.” However, Gatta revealed in May 2009 that after 6 months of discussions on developing the film, Ratner was off the project due to the busyness of Ratner’s schedule. Regardless, Gatta was hopeful of still meeting the intention of Millennium to start filming on August 24 in Bulgaria. June 2009 revealed Marcus Nispel would take the reigns of director to the film. Sean Hood was announced in February 2010 to be rewriting the script once more for the producers.

Filming was first hoped to be started in Spring 2008. Nothing was set until Ratner came on board. Filming had a set date for August 24, 2008, in Bulgaria. Ratner however departed in May that year, and the start-date for filming was pushed back, with South Africa being revealed as another filming destination. Filming finally began, in Bulgaria, on March 15, 2010. The Bulgaria shooting locations are Nu Boyana Film Studios, Bolata, Bistritsa, Zlatnite Mostove, Pernik and Vitosh