Will Smith stars in Concussion, a dramatic thriller based on the incredible true David vs. Goliath story of American immigrant Dr. Bennet Omalu, the brilliant forensic neuropathologist who made the first discovery of CTE, a football-related brain trauma, in a pro player and fought for the truth to be known.  Dr. Omalu’s emotional quest puts him at dangerous odds with one of the most powerful institutions in the world. 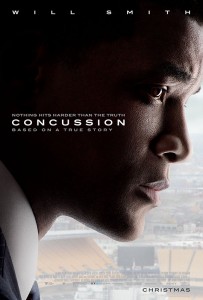 To prepare for the role, Will Smith immersed himself into the life of Bennet Omalu, reading his medical papers and watching his interviews. Prior to production, Smith also traveled to Lodi, California to meet with Dr. Omalu and his family, and was also able to watch the doctor perform an autopsy at the San Joaquin County Coroner, where Dr. Omalu is currently Chief Medical Examiner.

For writer and director Peter Landesman, the film is about much more than football. “Professional football is more than a sport. More than a business. It is a cultural and national institution. The Super Bowl is watched by a billion people. And like any gigantic business, there are powerful interests invested in keeping it going, no matter the cost. When Dr. Omalu made a discovery that threatened not just business as usual, but the very fabric of the game – the hits, the violence – those interests went into high gear. ”

Producer David Wolthoff, who with producer Larry Shuman first saw Dr. Omalu’s story as a potential film, with Shuman’s company originally optioning the rights to Jeanne Marie Laskas’ article in GQ, says, “At its core, Bennet’s story is the story of this genius doctor – an Erin Brockovich kind of character – who perseveres in the face of all adversity.”

Will Smith was able to observe Dr. Omalu in his practice. “Bennet is a forensic pathologist and he performs autopsies daily, so he spends a lot of time with dead bodies. But he’s also a deeply religious man,” says Smith. Dr. Omalu approaches his work with a dignity and reverence for the dead. “I’m Roman Catholic by faith,” he says.

The film chronicles not only Dr. Omalu’s discovery, but the campaign that followed to sideline his findings. Bringing Dr. Omalu’s story to life is Peter Landesman, who wrote the screenplay and directs the project. Years ago, Landesman – a former investigative journalist – had researched and met with Dr. Omalu. So, when the Scotts approached Landesman to write, it was destiny. “I already knew about Bennet, had met Bennet, had thought about Bennet, had metabolized what his life story was,” he says.

“I identify with whistleblowers, truth-tellers, people working against the system, David versus Goliath stories,” says Landesman. “First as a writer, I connected to Bennet as an immigrant, from Africa, in rusty Pittsburgh, the most American of industrial rust-belt cities, confronting the most sacrosanct of American institutions – American football – in a city where football is the beating heart of its people. The idea that it is this man who is left to tell the truth, our truth, about us, about a thing we love, is poetic and astonishing. All he wants to do is be an American, tell the truth, and be good.”

“I start each of my scripts by going on a journey of painstaking research and discovery, much as I do a piece of long-lead journalism,” says Landesman. “Once I’m inside the beast of the truth, then I can find the shape and architecture of the movie.”

Giannina Scott recalls that when she, Ridley Scott, and Peter Landesman initially pitched the story of Bennet Omalu to Sony Pictures, Amy Pascal, the former studio chief said, “Oh my God, I know who’s perfect for this!”  Scott adds, “And, at the same time, Ridley had already said, ‘This is perfect for Will because he has the sensibility and the kind of innocence that Dr. Omalu has.’  So Ridley spoke to Will to read, and it was so fast.  Will was in. When he read this he just knew that this was a role he had to play.”

Smith says the deal was sealed when he met with Dr. Omalu. “He talked about being a young boy growing up in Nigeria. He said, and we used this in the film, when he was growing up, Heaven was here – holding his hand high – and America was here – holding his hand just slightly lower. America was the place where God sent all of his favorite people, and he never wanted anything more than to be accepted as an American,” says Smith.

But it was not only that Smith found Dr. Omalu to be a unique and inspiring character with a unique journey.  The larger story was also one that Smith felt needed to be told. “I’m a football dad,” he says. “I have two sons – my oldest (Trey) was a big time football player. I think the thing that impelled me most to make this movie is that as a parent, is I actually had no idea.  I was concerned about my son breaking his leg – my greatest concern when he was playing was spinal injury.  But there was not one conversation, not one issue about long-term neurological repercussions. ”

Rising British actress Gugu Mbatha-Raw, who earned critical accolades for her title role in Belleand as a superstar singer in Gina Prince-Bythewood’s romantic drama Beyond the Lights, plays Prema Mutiso, a new member to his church from Nairobi, Kenya, who later becomes Dr. Omalu’s wife. Mbatha-Raw was immediately drawn to the fact that Concussion was a true story. Like Smith, Mbatha-Raw did her own research into the part and worked with dialect coach Diego Daniel Pardo to master Prema Mutiso’s Kenyan accent. On the final day of production, she would meet Prema and Bennet Omalu.

With the vast majority of the film being shot around the Greater Pittsburgh area, production designer David Crank’s work designing the film started with choosing the locations.  He says, “We began by trying to find as many of the real places from the story as we could, whether we were going to use them or not, we just wanted to see them.  We went through what was left of the old morgue, and we visited the new morgue and watched some autopsies being performed.”

With a majority of the crew Pittsburgh locals, over the course of production nearly 2500 local extras were hired to populate a multitude of scenes set in hotel ballrooms, nightclubs and bars, and football fields.

To coordinate the football scenes filmed at Pittsburgh’s Phillip Murray Playground and George Cupples Stadium and, later, at Rio Mesa High School in Oxnard, the production enlisted football coordinator Michael Fisher, who has worked as a technical consultant on dozens of sports films, including “Draft Day[2],”“Moneyball[3]” and “The Blind Side.” He was assisted by Scott Fujita, who was a former linebacker with Kansas City Chiefs, Dallas Cowboys, New Orleans Saints, and Cleveland Browns. Together they worked with the hundreds of local high school and college-aged football players who were cast after several open casting calls.