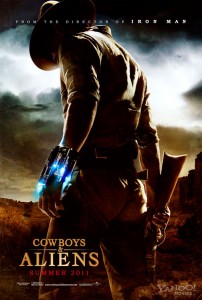 On a budget of $163 million, principal photography for Cowboys & Aliens began at Albuquerque Studios in New Mexico on June 30, 2010. One of the filming locations was Plaza Blanca, “The White Place”, where Western films like The Missing, 3:10 to Yuma, City Slickers, Young Guns, and The Legend of the Lone Ranger had been filmed.

In 1873 Arizona, a loner named Jake Lonergan (Daniel Craig) awakens with no memory of his past and a mysterious shackle around his wrist. He enters the town of Absolution where he learns he is a notorious criminal wanted by many people, including Colonel Woodrow Dolarhyde (Harrison Ford), a harsh leader who rules the town with an iron fist. But Absolution soon faces an even greater threat when mysterious forces attack the town from the sky, abducting anyone in their path. While Jake’s shackle holds the key to defeating them, he must align himself with Dolarhyde and other former enemies to make a stand against this mysterious and more powerful new foe.

Malibu Comics founder Scott Mitchell Rosenberg conceived the idea for Cowboys & Aliens as an ashcan in 1997 and subsequently saw its potential in a film adaptation. In May 1997, a bidding war for Cowboys & Aliens ensued between Walt Disney Pictures and 20th Century Fox, but Universal Pictures and DreamWorks partnered to purchase the film rights. Rosenberg formed Platinum Studios to help produce the film, and Steve Oedekerk was hired that same month to write, produce and direct Cowboys & Aliens with an estimated $3.5 million salary. He planned to start writing the screenplay after completing the script for Nutty Professor II: The Klumps, but he left due to his interest in a remake with Warner Bros. on The Incredible Mr. Limpet with Jim Carrey.

Chris Hauty had completed a rewrite for Cowboys & Aliens in October 2001, but the option on the film rights for Universal Pictures and DreamWorks eventually expired. In May 2004, the film rights were taken to Sony Pictures Entertainment, with Rosenberg also working with Escape Artists to finance Cowboys & Aliens. Thomas Dean Donnelly and Joshua Oppenheimer were hired to rewrite a script from Thompson Evans’s rewrite. With Cowboys & Aliens languishing in development hell, Rosenberg decided to publish the property in graphic novel format in December 2006.

In June 2007 it was announced that Universal and DreamWorks were returning to the project, with Ron Howard and Imagine Entertainment. Mark Fergus and Hawk Ostby were working on a new script, which was rewritten by producers Alex Kurtzman and Roberto Orci, who collaborated with Damon Lindelof. The writers struggled with the tone of Cowboys & Aliens.

The screenplay originally had a jokey and cynical tone, similar to the Transformers film series, before it was decided to take the approach seriously. “Imagine you’re watching Unforgiven and then Aliens land,” Orci explained. Robert Downey, Jr. became attached to star, and expressed the interest of Jon Favreau as director in September 2009. It was also confirmed that Harry Gregson-Williams will be composing the score for the film.