What happens when the CIA’s only hope to stop a terrorist threat to the nuclear arsenal lies in the dark, unpredictable recesses of a criminal’s damaged mind? Directed by Ariel Vromen and featuring a star-studded cast led by Kevin Costner, Gal Gadot, Tommy Lee Jones and Gary Oldman, Criminal is a fresh, provocative spin on the espionage action-thriller that probes the secret world of memory and identity, as it propels an unwitting death row killer into the consciousness of a dedicated CIA agent in a ferocious race against time. 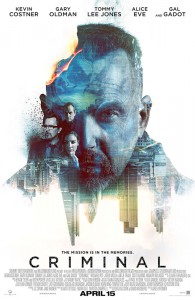 Some of the action sequences were so complex in their choreography and crane-work that they took both hundreds of crew and hundreds of extras to pull them off. One of director Ariel Vromen’s favorite sequences is when Jerico wanders through Central London’s famed Borough Market, experiencing his first taste of freedom in years.

Director Ariel Vromen – who came to the fore with the chilling crime story The Iceman[2] – saw in CRIMINAL’s action-packed story a chance to create a hybrid: to fuse elements of an unnerving psychological battle and mind-twisting sci-fi with the classic cat-and-mouse espionage game. He was drawn to the story’s scientifically provocative central idea: memory transfer, the ability to lock a person’s most intimate and individual sensations, hopes and flashbacks into a total stranger’s brain.

The futuristic, yet science-based, concepts that lie behind CRIMINAL emerged from the minds of the screenwriting team of Douglas Cook and David Weisberg, who previously wrote the hit prison escape thriller The Rock, among others. Cook and Weisberg became intrigued by cutting-edge research in neurobiology, brain architecture and artificial intelligence which suggests that the processes that make up our innermost minds might soon be mappable – and consciousness itself might become transferable from one human mind to a machine or even another human being. Some people call it the development of Humanity 2.0.

The writers embarked on intensive research, uncovering scientists who are exploring early stages of the surgery imposed on Jerico in CRIMINAL. Already, scientists have accomplished gene transfers into animal brain neurons and started making comprehensive maps of an individual brain’s neurons, gene expression states and electro-chemical signals, suggesting a brave new world of neurological manipulation lies on the horizon.

“We did a lot of research and, in the build up to production, Ariel also spent a lot of time talking to some scientists in Japan who are pursuing this very research. This is something that is remarkably close to happening one day in real life,” Weisberg notes.

When executive producer Avi Lerner, founder of Millennium Films, read the completed screenplay, he was riveted by the rocketing pace and suspense, by the story’s rich array of spies, doctors, hackers and convicts — and especially by the mind-boggling implications for a future in which memories may no longer be private and personal possessions. “Immediately we liked the concept of a real-life, scientifically-based transfer between good and evil,” Lerner says. Lerner was gratified to give Vromen a shot at his biggest, most star-studded production yet.

The excitement for Weisberg and Cook mounted as the cast began to take shape. Leading the film’s star-studded cast is award winning Kevin Costner in one of his most challenging and unusual roles. As Jerico, Costner had to inhabit two minds at once. Avi Lerner had the initial vision to put Costner in the intricate role.

One of the most fascinating aspects of playing Jerico was figuring out his tricky relationship with Bill Pope’s widow, Jill Pope, played by Israeli actress Gal Gadot, who unexpectedly lures Jerico and introduces him to feelings of love, loyalty and regret he’s never encountered. Costner found an unusual rapport with her, with both characters deeply unnerved by one another yet drawn to each other. “Gal is an actress I was not aware of before this movie and I had a great experience with her. Her character brings femininity to a movie that is hard and cold in parts,” Costner comments.

The one man who sees Jerico entirely as a tool to get what he desperately needs is the London-based CIA chief, Quaker Wells, portrayed by Gary Oldman. He was especially pleased to reunite with Costner – having starred with him and Tommy Lee Jones in Oliver Stone’s award-winning JFK previously – and to join forces with director Vromen for the first time. “It has been 20 years since Kevin, Tommy Lee Jones and myself worked together on JFK, and now we are reunited on CRIMINAL so it is quite thrilling.” says Oldman.

As Dr. Frank, Tommy Lee Jones also tackles a character quite different from any he has played in his long career. Often cast as tough, salt-of-the-earth men, Jones here plays a scientist caught up in the quest for a medical breakthrough without foreseeing the full consequences.

“We were trying to break the norm in terms of casting,” explains Vromen. “We get so used to seeing the same heroes in the same hero roles, it can become suffocating. Having Tommy Lee play a vulnerable man is a fresh approach. Likewise, seeing a professional, scheming, energetic Gary Oldman is unusual. These are all extremely talented actors and I love that their characters are the opposite of what the audience will be expecting.”

Jordi Molla (Riddick) takes the role of power hungry tyrant, Heimdahl, who is after The Dutchman’s ability to control the most powerful weaponry on earth to fulfill his own hunger to disrupt civilization.

Vromen had a very clear vision of CRIMINAL’s London – one that veers off the beaten path. “I wanted to bring the city into the film in a way that it hasn’t been seen before and film in places that even people from London never knew existed,” the director explains. “I wanted it really gritty, raw and definitely less clean, so we avoided Knightsbridge and Kensington. We sought out lesser known areas and found incredibly striking locations.”

Locations in the film span a wide range, including: Millennium Mill at Royal Victoria Dock, where the opening shoot-out between Bill Pope and Heimdahl’s men unfolds; a house in leafy Kingston Upon Thames – once the property of the King in Saxon times – as the home of Bill and Jill Pope, where Jerico is driven by memories; privately-owned Blackbushe Airport, where Heimdahl holds young Emma Pope at gun-point; Croydon College, which provided the hideout where Bill Pope stashes The Dutchman, the medical research lab and the CIA interrogation unit where Quaker Wells questions Jerico; the SOAS Library, one of the world’s most important academic libraries for the study of Africa, Asia and the Middle East, where Jerico searches for a mysterious duffel bag; and RAF St. Athan Airport in Cardiff doubling for Dover Air Force Base, where the production utilized the100-ton Airbus A400 transport aircraft along with numerous C130 Hercules transport aircraft.