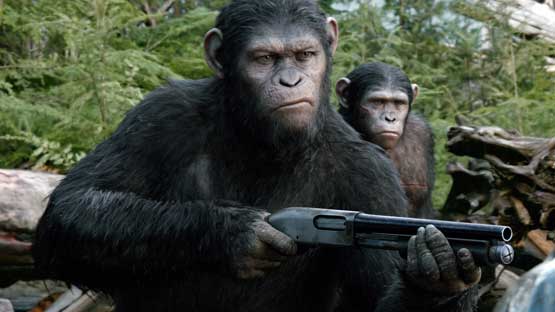 In  Dawn of the Planet of the Apes a growing nation of genetically evolved apes, led by Caesar whom Andy Serkis brought to life, are threatened by a band of human survivors of the devastating virus unleashed a decade earlier.  They reach a fragile peace, but it proves short-lived, as both sides are brought to the brink of a war that will determine who will emerge as Earth’s dominant species. 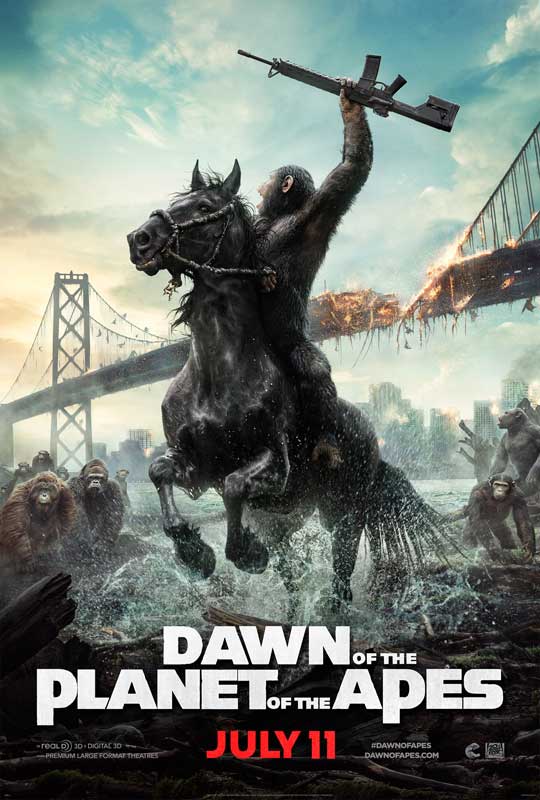 In Dawn of the Planet of the Apes, Caesar’s principal human contact is Malcolm, portrayed by Jason Clarke. Malcolm is a former architect who lost his wife to the virus that wiped out most of humanity. While Malcolm is a pivotal figure in the human colony, its leader is Dreyfus, played by Gary Oldman.  Oldman describes the colony as “a melting pot of survivors“. Working hard to rebuild her life is Ellie, a nurse who worked with the Center for Disease Control in its failed efforts to contain the viral outbreak portray by Keri Russell.

Reeves says that ultimately  Dawn of the Planet of the Apes isn’t intended as a fantasy. “What’s important is to find the reality, and take the one fantastical element and make that the only one. In this movie, that element is that they are intelligent apes. Everything else is completely realistic.”

That realism is further enhanced by the production’s ability to shoot in exterior locations. More than 85 percent of Dawn of the Planet of the Apes was shot in the forests of Vancouver and outside New Orleans. Serkis calls this a “huge technical leap that enables there to be no disconnect with the other actors.”

Shooting a film of this scope and scale in native 3D, coupled with the complex performance capture work amidst stunning yet challenging exterior locations was exponentially more difficult than what had been achieved on Rise of the Planet of the Apes. That latter featured mostly interior sets, but  Dawn of the Planet of the Apes depicts a community of 2,000 apes, living in wild surroundings, in humid, rainforest environments.

Keri Russell notes, “We were really cut off from civilization. On location it was quiet and beautiful but at the same time, we were a massive production. It was unbelievable to me that they got those giant 3D cameras and this epic moviemaking operation on these little trails in the rainforest.”

To capture the performances, Weta Digital had 35 people on each unit, an array of 50 or so mo-cap cameras and eight witness capture cameras that were constantly rolling on anything that involved an ape character.