The very fact that Deliver Us From Evil was finally brought to the screen, more than 10 years after the book on which it is based was acquired for filming, represented producer Jerry Bruckheimer, director/writer Scott Derrickson and author Ralph Sarchie’s unshakeable faith in the project. 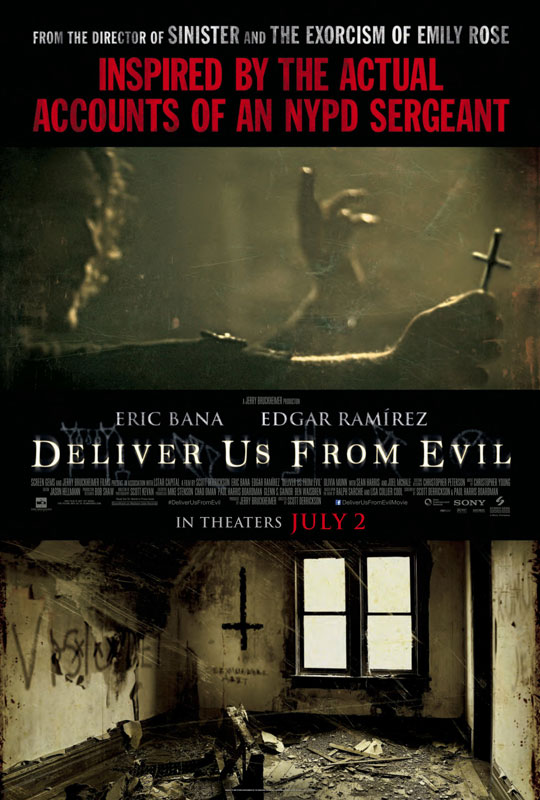 Eric Bana found that shooting in the Bronx helped him find and sustain his New York accent.

“We read a proposal about 11 or 12 years ago that Ralph Sarchie brought to us,” recalls Bruckheimer, “and we thought it was interesting, intriguing and scary. It excited me, and we thought we could bring it to the big screen. The story was really compelling, and it was based on fact: how a tough, blue-collar detective in a rugged part of the Bronx, becomes convinced that some of the incidents he’s investigating go far beyond the norm.”

Derrickson, who by nature is drawn to themes which are both spiritual and “supernatural”—and sees strong links between the two—was immediately drawn by the compelling tales which Sarchie described in his book. “In the book,” says Derrickson, “Ralph talks about his experiences as a cop in one of the most dangerous crime districts of New York, but also his gradual involvement in investigating cases of the paranormal, which eventually led him to become an assistant to an exorcist.”

Finding the right actor to play the demanding role of Joe Mendoza, an unorthodox priest who has battled his own inner demons and enters into a partnership with Sarchie at first uncertain and then bonded by the recognition of the evil which they are facing, was not an easy task. However, it led Scott Derrickson and Jerry Bruckheimer directly to Edgar Ramírez, the actor who had already staked out a hugely versatile career, first in his native Venezuela and South America, then around the world.

To prepare for his role, Ramírez felt that “it was very important to understand what a priest thinks and feels when he’s not giving the sermon in church on Sundays. I was lucky enough to talk to priests who were open to share their everyday feelings and anxieties. I also researched exorcism, and the psychological and emotional consequences that come from performing such a rite. The interviews that I did and the information that I collected indicated that it’s very close to post-traumatic stress disorder, because when you face the devil, you are going to war.

The filmmakers then found their Jen Sarchie—the wife of Bana’s Ralph Sarchie, whose love for her husband is tested when he drifts further into the darkness which seems to envelop him as he combats everyday and then paranormal evil—with their casting of the dynamic Olivia Munn.

True to the script’s greatly atmospheric backdrops, the first two days of filming were actually at the first of only two locations outside of New York City limits, in the nearly medieval confines of a mostly shuttered building which was part of the still active Nassau County Correctional Facility in East Meadow, Long Island. Cast and crew were compelled to pass through multiple well-guarded barred gates to access the dark, chilling confines of the interior sets—a psychiatric ward for the criminally insane housing, among others, Jane Crenna, portrayed by Olivia Horton.

While the Bronx would provide a great urban stage on which the characters would play out the suspense and drama of Deliver Us From Evil, responsible for appropriately attiring the actors was costume designer Christopher Peterson, who was determined to match the filmmakers’ desire for realism while at the same time using clothing as a means to explore the personalities on screen.

There is plenty of moody, atmospheric rain which falls on screen in Deliver Us From Evil, some of it thanks to the special effects team…most of it thanks to Mother Nature.