Denzel Hayes Washington Jr. (born December 28, 1954) is an American actor, screenwriter, director, and film producer. He first rose to prominence when he joined the cast of the medical drama, St. Elsewhere, playing Dr. Philip Chandler for six years. He has received much critical acclaim for his work in film since the 1990s. 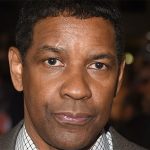 In 2008, Denzel Washington visited Israel with a delegation of African American artists in honor of the Jewish state’s 60th birthday. In 2011 he donated $2 million to Fordham for an endowed chair of the theatre department, as well as $250,000 for a theatre-specific scholarship to Fordham.

Denzel Washington is a native of Mt. Vernon, NY, and graduated from Fordham University, where he majored in drama. He spent a year at San Francisco’s prestigious American Conservatory Theatre before beginning his professional acting career. Since then, Washington’s unforgettable performances have garnered him two Academy Awards®, three Golden Globes, and countless other awards.

Denzel Washington’s professional acting career began in New York, where he performed in theatre productions such as “Ceremonies in Dark Old Men” and “Othello.” He rose to fame when he landed the role as Dr. Phillip Chandler on the NBC long-running hit television series, “St. Elsewhere.” His other television credits include “The George McKenna Story,” “License to Kill,” and “Wilma.”

As Washington crossed over into the world of film, he garnered critical acclaim for his portrayal of real life figures. He earned his first Oscar®nomination for Cry Freedom, as South African anti-apartheid activist Steve Biko. From there, he went on to portray Muslim minister and human rights activist Malcolm X in Malcolm X, boxerRubin “Hurricane” Carter in The Hurricane, football coachHerman Boone in Remember the Titans, poet and educatorMelvin B. Tolsonin The Great Debaters, and drug kingpinFrank LucasinAmerican Gangster.

Washington received his first Academy Award® for the historical war drama Glory and his second for his portrayal of the corrupt cop in the crime thriller, Training Day. Washington won a Tony Award for his performance in Fences, during his return to Broadway in the 2000’s.

In Unstoppable, Washington reunited with director Tony Scott for the fifth time, following Crimson Tide, Man on Fire, Déjà Vu and The Taking of Pelham 1 2 3. Washington can also be seen in 2 Guns (2013), alongside Mark Walberg, and The Equalizer, an action thriller film directed by Antoine Fuqua (2014).

In 2016, he was selected as the recipient for the Cecil B. DeMille Lifetime Achievement Award at the 73rd Golden Globe Awards, cementing his legacy in Hollywood.