Die Hard is a 1988 American action film and the first in the Die Hard film series. The film was directed by John McTiernan and written by Jeb Stuart and Steven E. de Souza. It is based on a 1979 novel by Roderick Thorp titled Nothing Lasts Forever, itself a sequel to the book The Detective, which was previously made into a 1968 film starring Frank Sinatra. The film was produced by Lawrence and Charles Gordon, along with Joel Silver. 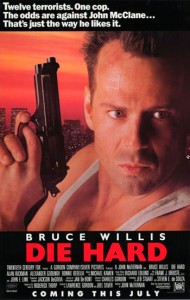 In the German dub, the names and backgrounds of the German-born terrorists were changed into English forms (mostly into their British equivalents, with the exception of Marco and Franco, who retained their Italian and French nationalities respectively): Hans became Jack, Karl became Charlie, Heinrich turned into Henry.

It stars Bruce Willis as NYPD officer John McClane, Bonnie Bedelia as his wife, Holly, and Alan Rickman in his feature film debut as thief Hans Gruber. The film was followed by three sequels; Die Hard 2 in 1990, Die Hard with a Vengeance in 1995, and Live Free or Die Hard in 2007.

Die Hard follows its source material — Roderick Thorp’s novel Nothing Lasts Forever — closely; many of the film’s memorable scenes, characters, and dialogue are taken directly from the novel. Nothing Lasts Forever, a sequel to Thorp’s earlier novel The Detective, was written with the intention of being adapted into a film sequel to the film adaptation of The Detective, which starred Frank Sinatra. When Sinatra turned down the offer to star in the sequel, the story was altered to be a stand-alone film with no connections to The Detective.

Other changes included the older hero of the novel becoming younger, the hero’s daughter becoming his wife, and the American Klaxon Oil Corporation becoming the Japanese Nakatomi Corporation. The novel’s tone is darker and more serious than the film’s, and the politically motivated fighters of the novel became thieves pretending to be terrorists in the film. Director John McTiernan states on the DVD commentary that the change from a tale of political terrorism to a heist film was made because he wanted to bring “joy” to the story, rather than having the villains be overly ponderous. The newly built corporate headquarters of 20th Century Fox, Fox Plaza in Los Angeles, was used for exterior shots of the Nakatomi building.

According to commentary from the film’s DVD release, Alan Rickman’s surprise when Gruber is dropped from the building is genuine: the director chose to release Rickman a full second before he expected it in order to get genuine surprise, a move which angered Rickman. The text commentary track also reveals that the shooting script did not originally feature the meeting between McClane and Gruber pretending to be a hostage; it was only written in when it was discovered that Rickman could perform a rather convincing American accent. The name Hans Gruber was used by one of the villains in the 1966 film Our Man Flint.

Based on 50 reviews collected by the film review aggregator Rotten Tomatoes, 94% of critics gave Die Hard a positive review, with an average rating of 8.2/10. The film’s title and its story of a lone hero battling a multitude of single-minded opponents in an isolated setting also became a common descriptor for later action movies: “Die Hard on a _____” became a simple and easy way to define the plot of many action films that came in its wake. For example, 1994’s Speed was called “Die Hard on a bus”,1996’s The Rock was dubbed “Die Hard on an island”.

However, Roger Ebert gave it a less than flattering review, giving it a mere two stars and criticizing the stupidity of the deputy police chief character, claiming that “all by himself he successfully undermines the last half of the movie.”

McClane’s catchphrase “Yippee kai yay, motherfucker” was voted as #96 of “The 100 Greatest Movie Lines” by Premiere magazine in 2007. In 2010, Die Hard was voted by Empire Magazine as “The Greatest Christmas Film of All Time”.

In July 2007, Bruce Willis donated the undershirt worn in the film to the National Museum of American History at the Smithsonian Institution.