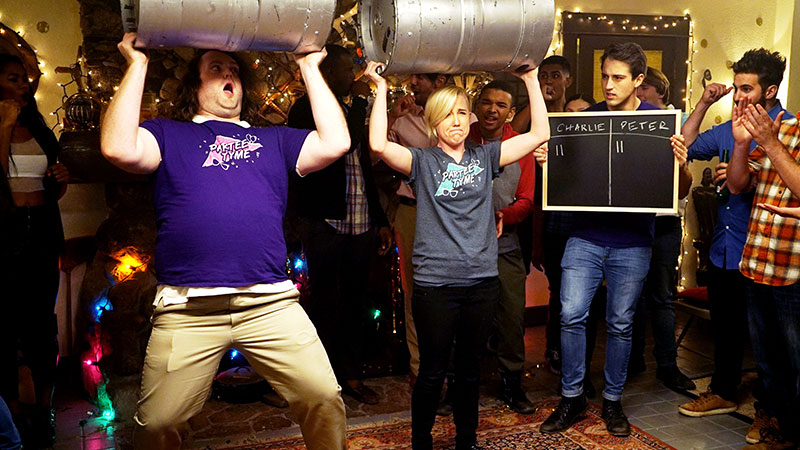 Lifelong friends Kate (Mamrie Hart), Evie (Grace Helbig), and Charlie (Hannah Hart) are in a rut. Kate spends her days at a middling job and her nights alone — or on disastrous dates. Evie, unhappily married with in-laws from hell, wanders from one charitable cause to the next. Charlie has the girl of her dreams but just can’t seem to get her business (or her act) together. Then, on the eve of her 30th birthday, Kate reads a letter she wrote as a teenager describing what she thought her adult life would be like. Depressed at how far she is from fulfilling her adolescent dreams, she agrees to let Evie and Charlie throw her a party. But what she envisioned as a simple and sophisticated soirée becomes an out-ofcontrol, booze-fueled mashup of her past and present that forces her to rethink what she really wants out of life. 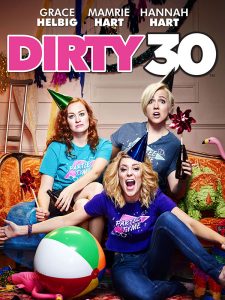 Dirty 30 producer Michael Goldfine, who has now made four movies featuring stars born and bred on social media, thinks that Mamrie Hart, Grace Helbig and Hannah Hart relationship with their fans makes them particularly committed to the projects they take on.

When Mamrie Hart, the screenwriter and one of the stars of Dirty 30, turned 30 herself, she knew exactly how she wanted to celebrate. “I like nothing more than a theme party,” says Hart, an accomplished comedian and creator of the hugely popular YouTube Channel “You Deserve A Drink“. “So I threw a ‘weapons party’ in a warehouse. I dressed as a ninja and had competitions with blow darts, Chinese stars, pellet guns — you name it, we shot it. It was a testament to how little I feel like growing up.”

Hart noticed that most of her friends were not as eager to embrace that landmark birthday, however. “So I decided to write a movie about turning 30 that would also be an homage to some of my favorite comedies — the great high-school party movies,” she explains.

Fresh off her first feature film, Camp Takota, which Hart also wrote and starred in with fellow YouTube phenoms and frequent collaborators Grace Helbig and Hannah Hart (no relation), she decided that a movie about a birthday party that goes off the rails would be a perfect next vehicle for them all. Producer and Camp Takota collaborator Michael Goldfine was also eager to climb aboard for another raucous, fun-filled ride.

“Mamrie, Grace, and Hannah are three of the smartest, funniest people I know,” says Goldfine. “I’d never had an experience like Camp Takota on either a personal or professional level, and I wanted to do it again.”

“Working with Mamrie is an organic process, because we are friends in real life,” says Helbig. “She, Hannah, and I met at a YouTube convention and saw immediately that we had similar aesthetics and work ethics. We just had to figure out how to convince people like Lionsgate to help us hang out together some more!”

Director Andrew Bush — founder of the Canadian sketch-comedy group Picnicface, pioneer in the world of internet humor, and frequent “Funny or Die” contributor — was a natural choice to direct the film. “I am a huge fan of comedy in general and of the party films of the ’80s and ’90s in particular,” he says.

The script was all but complete when Bush signed on, he says. “I worked with Mamrie on the script the way every director does, hammering out some of the scenes and working with the actors to bring them to life. We were lucky enough to have a few days to rehearse and get to know one another before the clock started ticking.”

Dirty 30 is the ultimate showcase for the unique talents of a trio of gifted writerdirector-performer-producer hybrids who have each honed their individual brand of wacky humor on the internet and in live performances. With a combined following of more than 5.5 million followers on YouTube, 4 million followers on Instagram, and 2.5 million followers on Twitter, Hart, Helbig, and Hart have made themselves social media superstars who are poised to do the same on the big screen.

Hannah Hart, the creator of the online cooking and comedy series “My Drunk Kitchen,” has degrees from the University of California, Berkeley, in English literature and Japanese. After graduation, she moved to Brooklyn to pursue a writing career, but got sidetracked when a video she posted of herself making a grilled-cheese sandwich while inebriated became a sensation on YouTube. Hannah Hart is the only one of the three who does not consider herself a professional actor.

To help their followers feel a part of the production process, the filmmakers created behind-the-scenes content, which they made available online. “When I was a kid I never got to see behind the scenes of the TV shows I loved, but the internet has broken down that wall,” says Helbig. “Our communities can have a sense of pride because they have been part of creating a different form of media.”