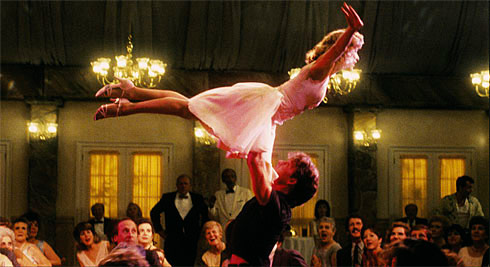 Dirty Dancing is a 1987 romantic film made in the United States. Written by Eleanor Bergstein and directed by Emile Ardolino, the film features Patrick Swayze, Jennifer Grey, Cynthia Rhodes, and Jerry Orbach. 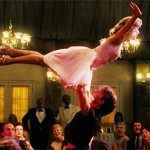 Dirty Dancing is in large part based on screenwriter Eleanor Bergstein’s own childhood: She is the younger daughter of a Jewish doctor from New York, spent summers with her family in the Catskills, participated in “Dirty Dancing” competitions, and was herself called “Baby” as a girl.

The story is a coming of age drama that documents a teenaged woman’s rebellion against her father by starting a relationship with a dance instructor during a family summer vacation. Almost a third of the film involves dancing scenes choreographed by Kenny Ortega (later famous for High School Musical).

Originally a low-budget film by a new studio and with no major stars (except Broadway legend Jerry Orbach in a supporting role), Dirty Dancing became a massive box office hit. As of 2009, it earned over $214 million worldwide.

Dirty Dancing was the first film to sell more than a million copies on home video, and the Dirty Dancing soundtrack generated two multi-platinum albums and multiple singles, including “(I’ve Had) The Time of My Life”, which won both the Golden Globe and Academy Award for Best Original Song, and a Grammy Award for best duet.The film spawned a 2004 prequel, Dirty Dancing: Havana Nights, as well as a stage version which has had sellout performances in Australia, Europe, and North America, with plans to open on Broadway.

The tight schedule allowed only two weeks for rehearsal, and 44 days for filming as it was already the tail end of summer. The cast stayed in the same hotel at Mountain Lake Resort in Pembroke, Virginia, and rehearsals quickly turned into disco parties involving nearly every cast member, even non-dancers such as Jack Weston. The dancing and drinking went on almost non-stop and, immersed in the environment, the lead actors, Grey and Swayze, began identifying with their characters.

Bergstein built upon this, encouraging the actors to improvise in their scenes. She also built the sexual tension by saying that no matter how intimate or “grinding” the dance steps, that none of the dancers were to have any other kind of physical contact with each other for the next six months.

Filming started on September 5, 1986, but was plagued by the weather ranging from pouring rain to sweltering heat. The outside temperature rose to 105 °F (41 °C), and with all the additional camera and lighting equipment needed for filming, the temperature inside could be as high as 120 °F (49 °C). According to choreographer Kenny Ortega, on one day ten people passed out within 25 minutes of shooting.

The elderly Paula Trueman collapsed and was taken to the local emergency room to be treated for dehydration. Patrick Swayze also required a hospital visit; insisting on doing his own stunts, he repeatedly fell off of the log during the “balancing” scene and injured his knee so badly he had to have fluid drained from the swelling.