Jason Kelly /Zac Efron/ is one week away from marrying his boss’s uber-controlling daughter, putting him on the fast track for a partnership at the law firm. However, when the straight-laced Jason is tricked into driving his foul-mouthed grandfather, Dick /Robert De Niro/[1], to Daytona for spring break, his pending nuptials are suddenly in jeopardy. 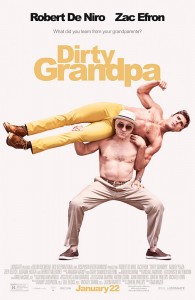 Improv without limits created an atmosphere on set that led to takes sometimes up to 20 minutes at a time going well beyond the page and offering completely different material to pull from.

For screenwriter John M. Phillips, the storyline for Dirty Grandpa came after an eye-opening night on the town with his father where he witnessed his dad’s surprisingly stellar skills with the ladies. “We began talking to some women and my dad was charming, funny and just crushed it, I couldn’t believe it. He made a passing joke that he would get back out there pretty quickly should my mother pass away and I was shocked to see that side of him. That experience mixed with some ideas I held on to from my Upright Citizens Brigade days spawned this story and some of the characters,” he explains.

The resulting script was an uproarious comedy with heart that offered an uncensored perspective on adulthood, aging and sexuality, all within a story that ultimately celebrates our need to break free occasionally and live life to the fullest. The script eventually made its way to the desk of producer Barry Josephson, who immediately recognized the universal appeal of the story and its comedic brilliance.

During the writing process, Phillips had only one actor in mind for the role of Dick Kelly: the incomparable Robert De Niro, whom Phillips never in a million years imagined would be willing to take on the provocative role. “It’s crazy because when I wrote the script I was living in New York and always only had Robert De Niro in mind, who has that perfect blend of comedic timing and imperiousness that the character needed. He also had to be slightly terrifying and really smart, and De Niro certainly embodies all of those qualities,” explains Phillips.

For the role of Jason, Dick’s conservative and uptight grandson tricked into serving as co-pilot to Dick’s last effort at youth-grabbing wish fulfillment, the script was sent to actor Zac Efron, whose recent foray into the comedy realm with Neighbors[3] proved to be a huge success. Efron found the script shocking, smart, and hilarious and was all-in, particularly when presented with the possibility of working with the incomparable Robert De Niro[4].

With the two leads actors in place, it was paramount to find a director who had an innate sense of what goes into making great comedy. The script ended up in the hands of Dan Mazer, a seasoned creative force who wrote and produced the ground-breaking comedies Borat and Bruno with long-time collaborator Sacha Baron Cohen. Though not typically open to directing material he didn’t write himself, Mazer was blown away by the script and agreed to meet with the producers and writer John M. Phillips.

When searching for the right actress to bring Shadia to life, Mazer quickly realized that up-and-coming actress Zoey Deutch had all the qualities necessarily for the role. Says Mazer, “Zoey was the first person we saw and I immediately knew she was it. Not only is she incredibly beautiful, but she has the rare combination of beauty and comedy, which is a very hard thing to find.”

As the polar opposite of Shadia’s cheerful nature, Jason’s fiancée Meredith is a type-A personality who’s every move is curated to exude perfection. For Mazer, the idea of playing role reversal with America’s sweetheart Julianne Hough was fun to explore. “Julianne has to play the perfect woman, which essentially in real life she is. But what’s brilliant about her playing Meredith is the idea of making Julianne channel that kind of bitch in her that is a million miles away from who she is. There’s a real delight in seeing that and she’s been very game.”

With two primarily dramatic actors at the center of the comedy, it was important to the filmmakers to surround Efron and De Niro with a strong ensemble cast deeply rooted in the comedy world. The production tapped comedic heavy hitters Jason Mantzoukas, Adam Pally, Mo Collins and Henry Zebrowski to raise the comedic bar. Says John M. Phillip.

As with all road trip films, chemistry between actors is essential. When filming commenced, it became quickly apparent that De Niro and Efron were ready to have fun with the material and came ready to play. Recalls producer Bill Block, “It was wonderful to see Zac and Bob laughing after and sometimes during a take. They shared a warmth, camaraderie and mutual respect playing this together.”

A master at improv, Pally was thrilled by the opportunity to push the envelope. “There was a ton of improvisation on set and there were definitely moments where I wondered if we crossed the line.”

“For me, the script is always the starting point,” explains the director. Every day it’s been a challenge to get through the takes without laughing.” Improvisational gold was found with actors Maureen “Mo” Collins and Henry Zebrowski, who play ridiculously inept local Florida police officers on the spring break beat who bear witness to some of Dick and Jason’s most outrageous antics. For Zebrowski, a past Upright Citizen’s Brigade collaborator with John M. Phillips, the opportunity to play with the material was unparalleled. “The great thing about this was coming on to it knowing that there was going to be a lot of improv. We could literally be as dirty as we wanted to be, which was pretty fantastic.”