Divergentis a thrilling action-adventure film set in a world where people are divided into distinct factions based on human virtues. Tris Prior (Shailene Woodley) is warned she is Divergent and will never fit into any one group. When she discovers a conspiracy by a faction leader (Kate Winslet) to destroy all Divergents, Tris must learn to trust in the mysterious Four (Theo James) and together they must find out what makes being Divergent so dangerous before it’s too late. Based on the best-selling novel by Veronica Roth. 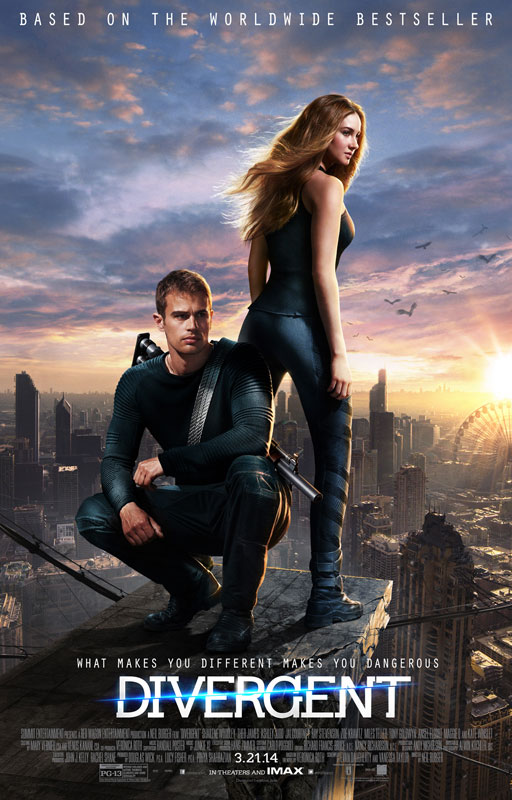 Abnegation was constructed in an urban environment in one of the busiest cities in the country, in full view of the Sears Tower, formally known now as the Willis Tower.

Filmed on location in Chicago, the futuristic action adventure Divergent is directed by Neil Burger, from a screenplay by Evan Daugherty and Vanessa Taylor, based on the novel by Veronica Roth.

In 2006 during her freshman year in college, author Veronica Roth first came up the seeds of an idea that would grow into the action packed book Divergent. Several months before the book was published in May 2011, Summit Entertainment closed a deal in February to acquire film rights, with Red Wagon toppers Douglas Wick and Lucy Fisher attached to shepherd the story to the big screen. “We’ve made a lot of movies from books, and as a producer you’re always looking for stories that you might want to tell,” comments Wick.

After being acquired by Lionsgate in January of 2012, Summit Entertainment signed helmer Neil Burger to direct the project several months later. The project would require Burger to guide a large cast that includes up and coming young talent, critically-acclaimed veteran actors, and complete unknowns… top-lined by a 21 year-old actress who appears in every scene of the film.

Winslet arrived in Chicago during the last month of filming. “There was a mythic buildup to the arrival of Kate who is admired and respected by everyone and a little bit feared… just because there would be a grownup on set full time. The other adult actors were here for a day or two and then gone. Wait ‘til Kate gets here,” says Fisher. The people involved and the universal themes in the story attracted Ashley Judd, and Tony Goldwyn to the project.

World creation on the big screen poses a different set of challenges than world creation on the page. “As a filmmaker, I’m inventing a complete world that you’re going to see, and Veronica certainly invented an amazing world in her book, but she only had to speak of what she wanted to write about. In a movie you see everything that’s going on, so as a filmmaker, you need to know the answers to a million and one things. During the prep, I was on the phone with Veronica all the time. I had a million and one questions for her to create this world. Do they have money? Do they have pets? If there’s a car, where are they getting the fuel? Is it an electric car? Is it a solar car? Where are they getting the material to make those solar panels? Maybe they’re recycling them. Why is this wall here? What’s coming? She got a lot of questions from me,” admits Burger.