Django Unchained is a western film written and directed by Quentin Tarantino. The film stars Jamie Foxx, Christoph Waltz, Leonardo DiCaprio, Kerry Washington and Samuel L. Jackson. The film is scheduled to be released on December 25, 2012 in North America. 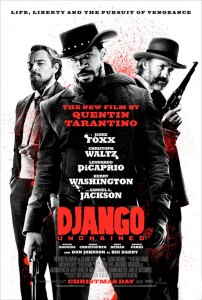 It was originally reported that Will Smith was Tarantino’s first choice for the role of Django, but in the end Jamie Foxx was cast for the role. Additionally, Franco Nero was rumored for the role of Calvin Candie. Kevin Costner was in negotiations to join as Ace Woody, but dropped out due to scheduling conflicts. Kurt Russell was cast instead, but also later left the role. When Kurt Russell dropped out, the role of Ace Woody was not recast but instead the character would be merged with Walton Goggins’ character, Billy Crash.

Django (Jamie Foxx) is a slave living in the Deep South after having been separated from his wife Broomhilda (Kerry Washington). When Django is held for a slave auction, Dr. King Schultz (Christoph Waltz), a German bounty hunter who uses his former profession as a dentist as a cover, frees Django from his vicious masters, the Speck brothers (James Remar and James Russo), and gives him the option of helping him hunt down and kill the Brittle Brothers, a ruthless gang of killers whom only Django has seen. In return, Schultz will free Django from slavery completely and help find and rescue Broomhilda from the brutal but charming Francophile Calvin Candie (Leonardo DiCaprio), who owns Candyland, a plantation where male slaves are trained to fight for sport and female slaves are forced into prostitution.

In 2007, Quentin Tarantino, speaking with The Daily Telegraph, discussed an idea for a form of spaghetti western set in America’s Deep South which he called “a southern,” stating that he wanted “to do movies that deal with America’s horrible past with slavery and stuff but do them like spaghetti westerns, not like big issue movies. I want to do them like they’re genre films, but they deal with everything that America has never dealt with because it’s ashamed of it, and other countries don’t really deal with because they don’t feel they have the right to.”

Principal photography for Django Unchained started in California in November 2011, Wyoming in February 2012, and at the National Historic Landmark Evergreen Plantation in Wallace, Louisiana, outside of New Orleans in March 2012. The film was shot in the anamorphic format on 35 mm film. After 130 shooting days, the film wrapped up principal photography in late July 2012.

Django Unchained was the first Tarantino film not edited by Sally Menke, who died in 2010. Editing duties were handled by Fred Raskin, who has worked as an assistant editor in Tarantino’s previous films.

One inspiration for the film is Sergio Corbucci’s 1966 spaghetti western Django, with star Franco Nero having a cameo. Another inspiration is the 1975 film Mandingo about a slave trained to fight other slaves.