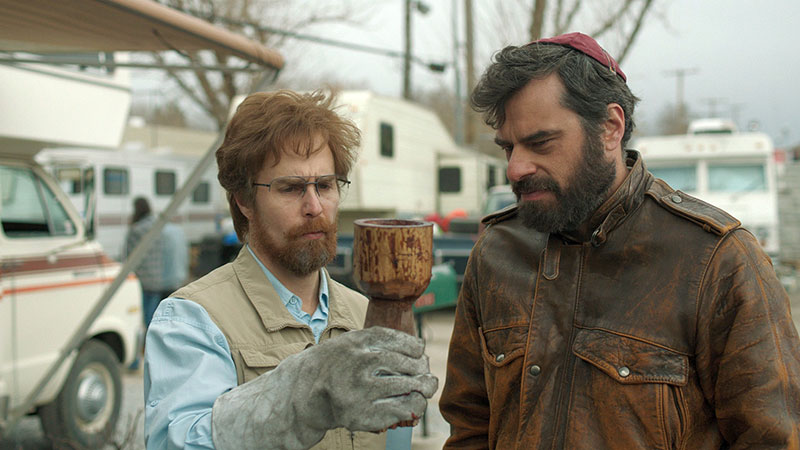 Hired by an ambitious small-town pastor to find sacred relics in the Holy Land, a self-proclaimed Biblical archaeologist comes up short and his attempt to cover up his failure fuels a comic conspiracy from the filmmaking team behind Napoleon Dynamite and Nacho Libre. 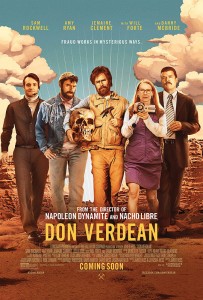 To help actor Sam Rockwell prepare for his role, director Jared Hess sent him footage of Biblical archeologists and evangelical leaders. The transformation the actor was able to effect surprised even his longtime collaborator.

In a series of off-beat and intensely original comedies, husband-and-wife filmmaking team Jared and Jerusha Hess have explored the diverse worlds of Midwestern high school nerds (their debut film, Napoleon Dynamite), masked Mexican Luchador wrestlers (Nacho Libre) and modern-day writers of far-fetched fantasy fiction (Gentlemen Broncos). In their fourth collaboration, Don Verdean, the pair ventures even further off the beaten path for a foray into the arcane arena of Biblical archeology, where highbrow academics and ambitious charlatans compete to prove that the stories of the Old and New Testament are factually accurate.

“My good friend and one of the producers on this film, Jason Hatfield, turned me on to the world of Biblical archeology,” explains director and co-writer Jared Hess. “He sent me articles and links to videos with some leaders in the field who all had different claims. I thought it was a fascinating and potentially humorous world to have things go wrong in.”

Hess became enthralled by the real-life world of Biblical archeology, reading and watching interviews with prominent proponents, but he says the character of Don Verdean is not based on any one person. “There are numerous figures in the field who have made outrageous claims over the years about what they’ve found,” he says. “It was more the psychology of a character who does this that fascinated me.”

As always, Hess and his wife and writing partner Jerusha Hess worked hand in hand to develop the script. “We throw out ideas for a long time and then we lock ourselves in an office for a few hours a day to write until the script is done,” says Jared. “It’s a lot of talking and brainstorming and dry-erase boards. We worked off and on for four or five months before we had something we were happy with.”

Jared Hess counts himself lucky to have been able to assemble his dream cast for Don Verdean, starting with his Gentlemen Broncos star, Sam Rockwell, in the title role. Rockwell, brings Don an otherworldly innocence and zeal even in his basest moments. The actor was intrigued by the unusual and specific world the characters inhabit. “It’s certainly one that I’m not familiar with,” he says. “I referred to a number of different sources to get to know it better. I had already played a born-again Christian in a film called Snow Angels. I used much of the same material as a reference for how people pray.”

Liz Himmelstein has worked with countless prominent actors, including Nicole Kidman, Kathy Bates and Frances McDormand, whom she helped achieve the Minnesota accent she used in Fargo. To assist Rockwell in honing the specific southern accent Hess had in mind for Don, the veteran dialect coach had a funeral director from Tennessee tape his lines.

To play Don’s loyal assistant, Carol, Hess tapped the talents of Amy Ryan. A Best Supporting Actress Oscar® nominee for her nuanced role as a bereft mother in Gone Baby Gone, Ryan has also demonstrated her considerable comedic chops in roles including Steve Carell’s abiding love interest, Holly Flax, on “The Office.” Although she learned quite a bit about Biblical archeology over the course of the production, Ryan said she intentionally did not spend much time on research prior to the shoot. “This woman is completely outside of her comfort zone,” she explains. “I figured the less I knew about it, the better. The conversations I had with Sam and Jared were more about comic tone and how truthfully we were playing this. Sam wanted to approach it more as a character study than a comedy, which really grounded it in reality.”

Jemaine Clement, perhaps best known for his portrayal of a hapless musical hopeful in the TV series “Flight of the Conchords,” plays Boaz, an Israeli shepherd who is Don’s main contact and advance scout in the Holy Land. Clement was also excited at the chance to collaborate with an actor he has long admired. “I’m a big fan of Sam Rockwell. We were both in Gentlemen Broncos, but we didn’t have any scenes together. I was glad to get a chance to work with him.”

The vast majority of excavations and investigations by Biblical archeologists are carried out in areas that appear in the Old Testament: Israel, Egypt, Jordan and the surrounding region. For the film, however, Hess was limited to his home state of Utah, which meant extensive location scouting and creative thinking on the part of production designer Richard Wright.

With little time or budget for building, the filmmakers used practical locations whenever possible, combing the Utah landscape for sites that resembled remote Holy Land archeological digs. “Getting the look and feel we wanted presented a challenge,” Hess says. “But ultimately we were able to find a wide variety of locations that are true to our settings, all in Utah.”