In Draft Day, on the day of the NFL Draft, general manager Sonny Weaver Jr. (Kevin Costner) has the opportunity to rebuild his team when he trades for the number one pick. He must quickly decide what he’s willing to sacrifice in pursuit of perfection as the lines between his personal and professional life become blurred on a life-changing day for a few hundred young men with dreams of playing in the NFL. 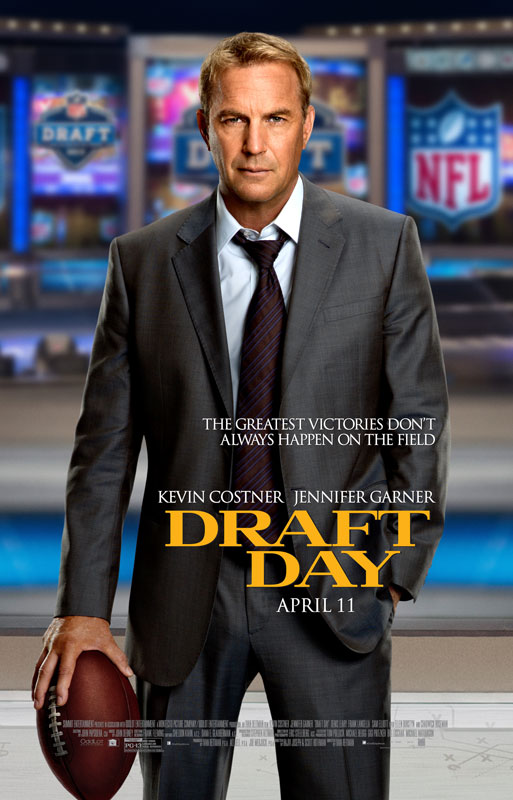 During each day filming at the draft, production was given a ‘hard out’ (an unmovable time by which production has to have totally cleared and left the space), when access needed to be turned over those actually taking part in the draft.

If the motion picture industry were a parallel version of the National Football League, Ivan Reitman would fill the roles of both Coach and General Manager, and he would be termed one of the ‘winningest’ directors in the industry.  With his keen eye for cinematic potential, Reitman knew what he had when the script for Draft Day crossed his desk at The Montecito Picture Company, the film and television production entity he heads with partner Tom Pollock.

Director Ivan Reitman comments, “It was never my intention to make a great football movie.  It was not a dream of mine, even though I’m a big football fan.  I just happened to get this script, and I actually remember reading it in the middle of the night. ”

For the role of Sonny Weaver Jr.—the man at the center of story—filmmakers cast iconic actor Kevin Costner. “He’s an American, and I play American characters, for the most part,” comments Costner.

For Jennifer Garner, the filmmakers had her interest once she had read the script. She confirms, “The screenplay just crackles off the page. When the script is this good, and then you learn Ivan Reitman is involved, and then Kevin signs on, and then Denis Leary…you realize they can pretty much handpick whoever they want, and with all of that together, it generates even more excitement about the project overall.”

For some of the actors, it took more than a familiarization with terminology and finding a level of comfort on the athletic settings—they needed to become believable stars of the game.  To assist in this, production brought aboard Michael Fisher as football coordinator, with more than two decades of experience creating believable athletes and sporting action for the cameras.

Draft Day principal photography began on Wednesday, April 25, at the 2013 NFL Draft at Radio City Music Hall in New York City, one of several key locations that figured in the story.  Oddly enough, that location wasn’t always included in the script.

Exteriors were shot with Langella as team owner Molina arriving at Radio City Music Hall, with the crowd gathered (a combination of extras and true fans of the draft) to follow the goings-on inside the building.  During breaks in the actual telecast, filmmakers were able to capture establishing snippets, including Langella as Molina onstage while the commissioner announces the beginning of the draft.