A massive success in its native China, Dragon Blade brings action spectacle on a grand scale to US audiences. Featuring an international cast led by Jackie Chan, John Cusack[1] and Academy Award®winner Adrien Brody, the film features the fight for the Silk Road when East and West collide. 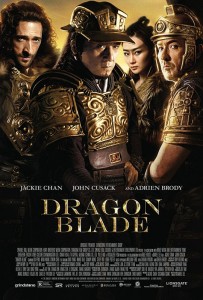 Seven years in the making, DRAGON BLADE is an epic in the history of Chinese cinema. Filmed on a record-breaking budget of $65 million, the crew had to work with the most time-consuming of actors: animals and children.

DRAGON BLADE is another milestone in the career of Jackie Chan who stars, produces and directs the action.

Director Daniel Lee wore several hats in the production of DRAGON BLADE, bringing together his wealth of experience of making period martial arts films. Lee decided to make his own film of the events after he met with Jackie Chan; he began writing the outline of the film seven years ago. For Lee, the most interesting aspect of the story is the high concept of a Roman legion entering China. Although there is no historical record of Roman soldiers engaging in a war within China’s borders, the film imagines that possibility.

John Cusack[1]’s Roman general is a tragic figure. The director finds Cusack dashing and romantic. Cusack prepped for his role with muscle training and by practicing martial arts, kickboxing and sword fighting. In the scene in which Lucius saves the life of Publius,he had to perform a complicated fight sequence, battling several men from the opposing Roman camp. Cusack repeated the scene from morning until night.

Adrien Brody is a mischievous soul who brings playfulness to his performance. Since the director is also the screenwriter, he could fine-tune the script for the actors after getting to know their personalities and strengths on set

The production team embarked on a strenuous and lengthy journey to make this unique story. They wish to express the film’s inherent grandeur through its storyline, concept and production. The creative team decided to construct Wild Geese Gate as a physical location, going to great lengths to fabricate Roman trispastos cranes, iron cages and bricks, following original designs and proportions faithfully, but also adding a dash of Chinese element. Director Daniel Lee notes that detailed blueprints were drawn up for the construction of the whole castle town. Filmgoers can see how Wild Geese Gate is rebuilt as the story develops.

Since the film is set in the western frontier region, the desert heat, sweltering sun and constant sandstorms were great challenges for the crew. They faced at least three large sandstorms, and many minor ones, during the desert shoot, sometimes with visibility limited to 2 meters. Sudden surge of temperatures came with the sandstorms with the ground temperature sometimes above 50 degrees Celsius. They lost count of the repeated instances of damage to the tents and camera equipment.

Jackie Chan might be willing to attempt every risky scene in the screenplay, but he always watched out for others, especially the children. He often led the child actors to safe spots in between shots, telling them “it’s dangerous over there, stay here.” There are many retakes in the scene in which soldiers chased him and Xiu Qing into an alley where he engaged in a fight with one. Chan was afraid that he might cut an extra on the face each time he made a turn, as he was holding three blades in his left hand.

Filmmakers can easily find locations that have never been captured on film. Aksai, one of the main locations, was chosen because it is within the Aksai Kazakh Autonomous County in Jiuquan, situated at the intersection of Gansu, Qinghai and Xinjiang provinces. The climate is arid and windy all year around. The crew was in full desert gear, including UV-protected clothing, scarves, face masks and sunglasses. You could only identify a crew member by his stride and voice.