Daniel Craig (Cowboys & Aliens,  The Girl With the Dragon Tattoo), Naomi Watts (The Ring, Fair Game) and Oscar® winner Rachel Weisz (The Constant Gardener, The Lovely Bones) star in Dream House, a suspense thriller about a family that unknowingly moves into a home where grisly murders were committed… only to uncover even darker mysteries within its walls. 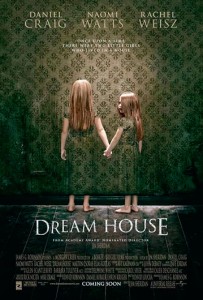 In 2009, production partners Daniel Bobker and Ehren Kruger brought Morgan Creek CEO James G. Robinson and vice president David Robinson the script for Dream House.  Bobker and Kruger, who had previously collaborated on the supernatural thriller The Skeleton Key and the action-adventure The Brothers Grimm, were intrigued by the themes that screenwriter David Loucka explored in his psychological thriller and were convinced that Morgan Creek was the right production partner to develop and finance the project.

Loucka wove the fascinating tale of Will Atenton, an accomplished publisher who leaves a hectic job in New York City to spend time with his wife and two young girls in their New England home.  Just as he settles in to begin his new career as a writer, Will’s family is plagued by a series of disturbing occurrences in their house.  Now, he is forced to confront the fact that nothing is as it seems.

James G. Robinson explains his decision to develop and produce the material: “With so many thrillers, it becomes painfully obvious early on what the twist is, and the director spends the majority of the time trying to cover his or her tracks.  What set Dream House apart is that it explores the mystery as it happens from one person’s perspective.  As Will tries to figure out who killed the family—or if anyone actually did—there is self-doubt and self-accusation.  We loved that you can project your own thoughts onto the material.  As it unfolds, the audience will question their own assumptions about what is happening.”

Principal photography took place mostly on location in Ontario, Canada from February to March 2010, while re-shoots were scheduled for December 2010.

Production of the film was deeply troubled, with Daniel Craig and Rachel Weisz reportedly so unhappy with it that they refused to promote the film and director Jim Sheridan losing control of the film to the studio. The first official trailer was released in July 2011, clearly revealing the ending of the film.