Eat Pray Love is a film based on the memoir of the same name by American author Elizabeth Gilbert, co-written and directed by Ryan Murphy. It began filming in August 2009. Filming locations include New York City (United States), Naples (Italy), Pataudi (India), and Bali (Indonesia). 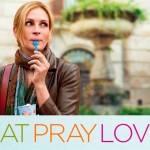 Hindu leaders voiced concern over the production of the film and advocated for the use of spiritual consultants to ensure that the film conveys an accurate reflection of life in an ashram.Few Balinese were used in the production — the two Balinese lead characters (Ketut Liyer and Wayan) are played by non-Balinese actors.

The movie opens with our heroine riding her bike along a grassy roadside in Bali. She reflects on a friend of hers who was called to offer help at a refugee camp; the friend was so uncertain of how she could possibly relate to the tragic background of the people yet quickly discovered the ongoing topic of conversation was Love and broken relationships. The bike rolls to a stop in front of an open structure.

The rider/our narrator is Liz Gilbert (Julia Roberts); she introduces herself, as the journalist from New York there to write a piece on The Healer. As Liz is led towards The Healer, fussing with her linen jacket all the way, we hear her think to herself, of all the questions she could ask, rather than how to achieve world harmony, she too wants to ask about her love life.

James Franco plays David, the man Gilbert has an intense relationship with while she is finalizing her divorce.